Home News Entertainment My father wanted me to be medical doctor 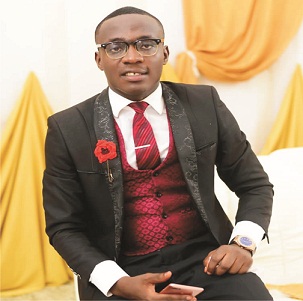 My father wanted me to be medical doctor
|
By Itunu Oloyede

An Akure based master of ceremonies and comedian, Charles Adu popularly known as MC Jingle  said that his father did not support him when he started because he wanted him to be a medical doctor.

In an interview with Friday Extravaganza he said his father later supported him when he heard he was to perform for the former governor of Ondo State, Dr. Olusegun Mimiko at his monthly praise night called, “Divine Agenda”.

MC Jingle who hails from Ado Ekiti, Ekiti State, said that he dabbled into comedy  due to the way people laugh anytime he talks and the passion he has for it.

“My vision is to create an atmosphere of laughter and good sense of humor. My mentor is Bovi and my role model is Ayo Makun popularly known as AY, I do enjoy them perform,” he added.

A graduate of Science Laboratory Technology from Ekiti State University, Ekiti State, noted that being an  MC is a thing he does with passion and God has blessed him through it.

In addition, he explained how he juggles both  career and studies together. “I always manage my time wisely”, he said.

He explained the challenges he faced when he started. These include; discouragement from friends and people around and fund.

“When I started, I was discouraged by my friends and people around me. They said I am not funny and I should find something else to do. Also, I could remember the day I cracked some jokes and my audience did not laugh, so discouraging”, he said.

“The issue of money was also one of my challenges when I started, there was a day I went for a performance and I was not given a penny after performing, I have to trek home with my suit on”.

He urged upcoming comedians to be sure of their calling, to pray for divine guidance and to work hard.

“Believe in yourself and be hardworking. Only God gives wisdom and without God’s guidance, you can miss your way in life so pray until something happens. Each and everyone has his calling therefore, be sure of your calling”.

“Have a good mentor and vision also, surround yourself with like minds people due to the fact that human have the power to influence one another”.