‘My husband wants to use me for ritual, separate us’ 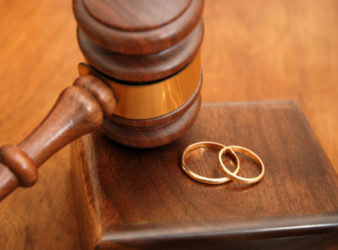 By Kayode Olabanji
|
It was a bitter pill for an electrical engineer, Bankole Obaniyi, as the Grade A. Customary Court sitting in Oke-Eda, Akure dissolved the six-year-old union between him and his wife over allegations of ritual and fetish behaviours.

The 32-year-old plaintiff, Mrs Tosin Obaniyi, had earlier dragged her estranged husband, Bankole, to the court asking for the dissolution of the six-year-old union, which produced two children, on grounds of fetish and ritual behaviours.

Tosin, while recounting her ordeal said; “My husband would have used me for money rituals if I did not run for my dear life. I caught him keeping our used condoms inside an uncompleted building, which I suspect would be for spiritual purpose.

“I also saw a black soap inside his wardrobe and alligator pepper(Atare), because personally, I had noticed my life drawing backward on daily basis since we started living together as husband and wife, compared with what I used to be before we married.

” I want the custody of the children. My life is not safe living with him. He can kill me for money rituals,” she cried.

“There was a day I got home and saw my first born, Inioluwa. Part of her hair was cut off and up till now, we do not know who did that to her. My effort to raise alarm proved abortive because my husband said I should not shout. He warned that if I do, I should be ready to face the consequences.”

She therefore, urged the court to separate the relationship for peace to reign and for safety.

The plaintiff also claimed that her husband never cared for the children. “The second born child, Emmanuel was terribly sick to the extent of dying. But I was the only one who made sure he survived it. My husband only gave me five hundred naira (N500) after I had spent huge amount of money.

There’s no benefit from this relationship, it is better I run for my dear life,” she said.

“I had to quit the house to my mother’s house. And since I left, none of my children fell sick again, I decided to pack my properties from his house, but he did not allow me. He pursued me with machete asking for his children.

” Later I deceived him that the children are in the church for 7 days prayers which was arranged for them by the Pastor for their safety.

“There was a day I heard my name on a radio programme anchored by Gbenga Fulani, where he disclosed all my family affairs trying to blackmail me and my mother, saying words in contrary to what is happening, I was so surprised.”

“My Lord kindly separate us for peace to reign, she urged.

The respondent, Bankole Obaniyi, denied all the allegations leveled against him, saying “my wife is just saying all these to accomplish her mother’s wish. “Her mother has been our problem from the first day. She is not in support of our living together as husband and wife. She said she wants her daughter to marry a pastor. But since my wife had gotten pregnant for me,” I pleaded with her to allow us marry each other, assuring her that things would be fine. But she insisted that she wants her to marry an evangelist, despite the fact that her daughter was already carrying my baby in her womb.

The respondant told the court that it had been from frying pan to fire because his mother. in-law never allowed peace to reign. He claimed he tried his best to convince his wife’s mother, “I often give her money and food stuffs at large quantities and other necessary things as in-law, but all efforts proved abortive.

“There was a time I gave N200,000 to my wife to add to her trade, but she spent it lavishly. I later heard she bought a land. I paid my children’s school fees as at when due. I did all I could as a father to my children, husband to my wife and as a good in-law to my mother in-law”.

Bankole, who denied the keeping of used condoms in an uncompleted said, “My Lord, I expected my wife to pick the used condom after sex, but she would not. Sometimes she would leave the condom be in the bathroom for three days but my wife who used to clean the house will leave it untouched. So whenever I saw it, I will pick it and dump it in the uncompleted building which is part of my house.

“My wife knew I had skin infections, and that I have been using the black soap to cure it. She told everyone around us that I am using her glory. We have had several meetings to settle this matter by pastors in the church, but my mother-in-law will never oblige.

Bankole, said he was at home when one Gbenga Filani called him to come and see him.

“On getting there, I met my wife and her mother. So Gbenga asked my wife why she left her husband’s house and she responded that mama caused it, but she did not even understand how it happened.

“I explained to Gbenga, how we started our union peacefully without quarrels. Despite all efforts for settlement, my wife left me for Lagos. All efforts to reach her, was in vain. Her mother kept telling me to leave her daughter alone. That we cannot marry”

Until that fateful day, I received a call from her. She told me that I should go and settle with her mother, if I still want her. Her father said the same thing the time I called him and whenever I called her mother, she responded with curses.

“My Lord, it will be better we go our different ways, I am fed up of this union. Afterall, her mother did not allow me to pay her dowry”

During the cross-examination, the court noticed from the evidence endorsed by both parties in the case before the court that, “It is crystal clear that there is no more love between the parties. Also it was not in doubt that no formal marriage exists between both parties”

In his jugdement, the Presiding President, Mr R. F Olusanya, held that it will be disastrous to force both parties to continue with their co-habitation. This court hereby orders both parties to go on their own separate ways with effect from today, Monday 15th 2018, without any molestation or harassment from either quarter.

He, therefore, ordered the defendant to allow the plaintiff to pack all her properties with immediate effect.