Home News Entertainment My love for music, a mystery – Catalyst 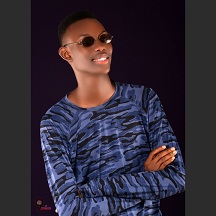 My love for music, a mystery – Catalyst

By Hannah Ejiro Ogidiagba
|
An Ondo based musical artist and a song writer, Femi Olakanye also known as CATALYST, said he has been singing and writing songs for about six years now.

Catalyst, who hails from Ondo town in Ondo state, is a Mass Communication undergraduate of the Adekunle Ajasin University Akungba Akoko (AAUA) is born into the family of three.

Femi in an interview with the Friday Extravagant said “I have recorded about five songs and has featured in few. I have written over seventeen songs and still working on more”.

He finally released his first official single last year 2018 titled “Mega Super Star” which hit all over the campus and in a few media houses. CATALYST love and motivation for music is a mystery which cannot be explained.

“I don’t know how I developed this love for music as a kid and I never knew I could sing and make music till I just decided to test myself and I started working on myself, At a point, I thought it was a joke until I got cheered by friends and family that I can actually do this music thing and that was it”.

Femi expressed his challenge’s of trying to break into the mainstream of music industry because there are numerous of people out there also striving to get to the top also and doing music in Nigeria seems to be a difficult thing with competition.

When asked what he would change in the music industry if he is privileged, he said.

“If I am privileged to change anything in the music industry, I think I will be giving opportunities to the upcoming ones to showcase their talent themselves, I feel those in the limelight don’t give others enough opportunities as possible”.

“It feels like it’s more like a round dining table where they don’t want other to eat from, if you know what I mean, I’d love to adjust that,” he added.

However, Catalyst affirm his parents full support over his music career especially his mum.

“It is indeed a thing of joy to see your child at his peak of success, even my mum is more current that me, she knows the latest update even before I know” he said.

He said further that  he want  to be original and do real big things in his career and break boundaries and he mentioned his role models as Wande Coal, Kizz Daniel, Patoranking, Davido and Wizkid, just to mention a few.

However, Femi admonished his peers to always hold up to three things.

“It’s three things I will say to people out there. (Talent, Grace and Hardwork). Once you have the talent pray hard or that grace and put in much hardwork and consistency”, Success issue.