My music career is a call from God 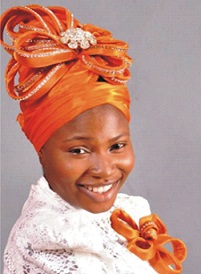 By Bamidele Kolawole
|
A Nigeria gospel artiste, Evangelist Folasade Taiwo, said her music is to preach the gospel to the world.

Taiwo who has been singing for 12 years, said she started her music career as a backup singer for Evang, Bola Are, where she developed her gift till she attained her current position.

Taiwo, who hails from Olupona in Ayedire Local Government area of Osun State, said that God has been faithful to her since she has been singing.

Taiwo, a Diploma graduate in music from Bass Goman Institution (Bola Are school of gospel music) Ibadan, said she encountered some difficulties when she started singing but God has been able to sustain her till the moment.

“It was not easy when I started, I started going to churches where they were doing praise night, begging them to give me two minutes to minister, telling them that I can sing, because I have a big God in me that can do all things.

“God started promoting me from there, people began to call me to minister in their churches and since then God has been my source of inspiration.

“My music career is a call from God, I have the backup of my father, he said I should be preaching the word of God and proclaim that Jesus is Lord.

“My ambition in music is to become a great gospel icon in life and reign with Jesus at the end of my race” she submitted.

She mentioned some challenges she encountered  since she has been singing, saying the issue of marketers and promoters are big issues in the gospel music industry.

According to her, these people did not want to spend their money on upcoming artistes because they believe that they are not popular enough to be promoted.

She enjoined gospel artistes to allow God to promote them and to stop looking for help, saying that it is only God that can promote you and will not collect any bribe.