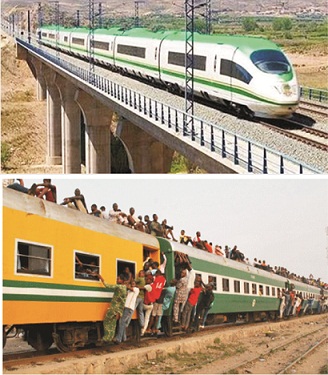 My Railway experience in Lagos

By Bukola Olamona
|
Paaaan………I thought it was the trumpet that sounded  the end of this world as we were made to understand in the Bible, but alas! it was a railway noise that woke me up at around six  in the morning as I was very tired from the previous journey to Lagos that Sunday.

I jumped up from my bed and was wondering where the noise was coming from, and as I  peeped  out of the window and realised  that it was a  train that was making  a chugging sound.

I had not seen a train for a long while, through my room’s window, I can see the moving train and what baffled me was that a lot of people were  sitting on top  of  the train, some  hanging on its two sides  and they were not even afraid   of their lives.

The school where I was doing a course National Broadcast Academy (NBA), situated at No 1, Adekunle Fajuyi, Ikeja, Lagos was beside a railway and nothing less than six or eight trains passed  through the rail everyday, hence the noise.

At first I was sceptical of the noise but got used to it .  I had to pretend that nothing happens and turned  it to an amusement thing.

Speaking with one of the commuters who has been working around Shogunle, a terminal of the railway for about 24years, Hajia Ronke Shekinat Asaka said she met the railway lines there and they have been working for a long time even before she came to the area.

” But  now people prefer going with train as they know the time it will take off and when it will get to their destinations “.

She disclosed that the price of the fare ranges from, N230  to  N750, adding that it depends on the commuters pocket.

“We also have the one that has air conditioner which is also very safe and moves very fast costs N750  and the other one for the general cost N250 depending on your pocket,.” she stated.

According to investigation, it was observed that the railway takes off from Ijoko which is a boundary town between Lagos and Ogun State to Ido in Idumota but have some terminals at Alagbado,Iju, Agege, Ikeja, Shogunle, Oshodi, Yaba, and terminate at Ido in Idumota.

In an interview with a commuter who did not want to be mentioned at Shogunle terminal, he said commuters prefer railway because to some extent, it is affordable and there is no traffic that can delay it except it has mechanical problem.

On why would they risk their lives, he said most of them did not have money to pay as they are indigent people who might not even have daily job but needed to get to their destinations.

He said though the proposed light rail by the Federal Government is okay but that it might be too costly for indigent commuters who might not have money but are fond of sitting on the train.

According to The Hope investigation, Federal Government is planning to build new metro light rail to link some states in the  country.

An example is the Lagos–Kano Standard Gauge Railway under construction.  Standard gauge railway across Nigeria, from the Atlantic Ocean port of Lagos to Kano, near the Niger border. The railway will run parallel to the British-built Cape gauge line, which has a lower design.

It is under construction as workers are seen working on the rail lines near Shogunle.

In the western world, the locomotives being used in Nigeria have been suspended  out and the metro light rail has taken over.

It is faster, clean and noiseless compared to the locomotives that are  slow, sometimes dirty and very noisy.

People believed that if the Metro light rail is  completed, it will decongest big cities as people can live in the nearby state and work in the big cities. For example,  anyone working in Lagos and having a house or family in Ibadan can make it to Lagos if they can set their priority right, they only need to know the taking off time  from Ibadan in the morning and  when it will  arrive Lagos and when it will take off from Lagos too and get to Ibadan.

The time on the railway can be used to rest while on their journey.