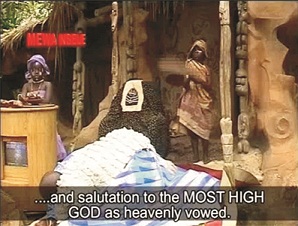 By Taiwo Abiodun
|
When he did not bath for 10 years he was  the talk of the town eight years ago. Now, it is 18 years the Prophet has not taken his bath. Prophet Moses  Wale Olagunju of Divine Seed of God Chapel Ministries, Ibadan   with confidence and total conviction spoke with Taiwo Abiodun that water would not touch his body until God instructs him to do so

…….Will bath when God instructs  me

WHAT THEY CALL ME

In Ibadan, Oyo State he is popularly known as Baba ti kiiwe (the  old man who does not bath). Among the Christian Pastors and Prophets he is known as a strange Prophet because  he is a thorn in their flesh as he accuses  them of not doing the will of God .He criticizes  the so called Men of God  and  called them fake pastors. He spends most of his  time on the Mountain than his home. Welcome to the  world  of Prophet Wale Olagunju who has not had his bath for 18 years.

At Iwo Road, in Ibadan  the name Baba ti kiiwe ( the old man that does not bath) is not strange to  any okada rider that plies  Ojoo routes   for he is popular in the environs.

The Prophet said  without mincing words  ” I have not taken my bath since 2001.It was the instruction from the  Almighty  God  and I have been like that since 2001.Water has not touched my body ”, he declared with total confidence.

Looking at his toes   and fingernails one would look at him twice as they are all unkempt   .Part of his  legs  had turned brown evidencing that he had not taken his bath for a long time , this is the life of a  sexagenarian  Prophet who lives in his church premises and spends most of his time  on Akike Mountain in Ibadan  to pray and seek God’s face .

Asked about his sexual life , ”what about sex?” , the prophet responded ” Sex? Ahh, no, no, forget about   that , somebody that stays  on the mountain? . I said  I sleep on the mountain and hardly come home to sleep”.

But does the wife complain?,  and he again  replied with voice raised  ” Oh no, no no, she has no reason to complain” .

”Does your congregants complain that you smell?”, another question thrown to him, yet he defended himself with a roar laughter and said ”No. None of them complain because I don’t smell. The last time you interviewed me did I smell?.I don’t have odour at all, it is God that sent me and I am convinced of His work on me”.

Again, this reporter asked him, ”Are you not an embarrassment to the public?”, he again replied ” No, no, not at all. Some people come here to verify the  authenticity of my story  and when I show them they glorify God” what they heard.And some  call me Baba ti kii we.

Olagunju said most of his yearly prophesies always  come to pass , he said ”I  have  a lot of prophesies that came to pass . I was the one who predicted that Bush would win , when he slugged it our with Kerry. My own prediction was the only one that came to pass then and it was published in Nigerian newspapers. In 2015 I also predicted that Buhari would win when other men of God said he would not. All Nigerian newspapers carried the story.  I predicted the impeachment of   Fayose and Ladoja and it came to pass.  On Atiku , I predicted that his name would be ringing like a bell . God told me that Atiku should pick Ikeremadu , former Deputy -Senate President but he  (Atiku) went to pick Peter Obi  as the  Vice – President , I didn’t know what happened , I didn’t know  for they did not listen to the voice of God . That is one of the problems Atiku is facing”, the Prophet declared.

Prophet Olagunjun berated many  Nigerian  Pastors and men who are deceiving their followers , he said ” because they did not receive from God unlike me Wale Olagunju  who received form God.”

are deceiving people simply because of money –that’s just the point  , they are using miracle to deceive people and make money”.

He however proffered solution to it and said ” People should focus on God, and read their Bible very well”. On whether Government can stop it, the Prophet declared ” no, the government cannot stop it , only God Himself can stop it.”

HOW I WAS CALLED

The Prophet said ” I received my  call in 1981 when I  was faced with a lot of problems  then  witches were tormenting  me  and I started running from pillar to post seeking solution .You see I am from a polygamous family as my father had many wives. While on the  Akike Mountain in  Ibadan God asked me to fast and seek for His holiness.  God asked me not to bath , and I am still waiting for instruction from Him when to bath. Whenever He tells me to go and bath I  would do so , all this happened in the year 2000”

The Prophet spoke about his background ” I am from Igbara Oke, Ondo state. My parents are late, I went to Anthony Primary School, Ede, Government Primary school, Okitipupa and completed his secondary school  at   St. Peter’s Primary School, Olode. I studied English language from  the University of Ilorin , then I proceeded  to  the Seminary Life International College Of Theology  where I developed myself to serve God.