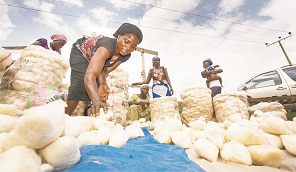 By Kemi Olatunde, Adekola Afolabi & Kehinde Oluwatayo
|
Officials of the National Agency For Food, Drug Administration, NAFDAC, from Abuja have visited Ondo and Ekiti States to take samples of “fufu” being produced in the two states for laboratory investigation.

Fufu is a locally made food produced from cassava.

A source within the agency who spoke with The Hope on condition of anonymity said the officials were in the states last week for the discrete investigation.

The Hope had last week exclusively exposed the antics of producers of fufu mixing hypo and detergents with cassava for it to ferment and swell, in a bid to make more gain.

The exposee by The Hope discovered that many fufu producers not only in Ondo State, but also in Ekiti, Osun and some other states engage in the unholy act.

This has led many unsuspecting consumers having medical challenges.

When asked where they got the samples from, the source stated that visits were paid to some of the places mentioned in the initial published report on poisonous fufu.

He noted that the quantity of the claimed harmful chemicals added to the food may not have effect on the health of the people as the heat from the cooking process would have neutralized its effect  which according to him will be in small quantity.

He assured that NAFDAC will officially make available the result from the laboratory test as quickly as possible.

Meanwhile, the General Manager, Ondo State Consumer Protection Council (CPC), Mr.  Ayo Mesileya, has disclosed that government would not hesitate to punish any producer or seller of poisonous food in the state in accordance with the law.

He said the state government was doing its best to ensure no poisonous food is found in the market for human consumption, adding that government was concerned about the healthy living of the citizenry.

He noted that the CPC in the state was  aware of unwholesome acts by some  Fufu producers and actions are being taken to educate the fufu sellers against the unwholesome act, noting that any producer or seller of poisonous food caught would be made to face the full weight of the law.

Moyinjesu   condemned the act, describing it as unacceptable and unhealthy, calling on them to desist saying such chemicals are cercinogenic.

“It is still one of the problems of the missing link in the value chain we are talking about.

“The issue is that the processors bought highly lignified cassava, tubers that have stayed too long in the ground.

“When they peel and grate, they will find a lot of ligny in it that cannot dissolve and in order to dissolve it, they add chemicals like hypochloride, detergent or potash so that the quantity can increase.

“It is because the value chain is not being monitored. The addition of these chemicals should not have come up if they bought the right product and if there are food technologists who will ensure quality control.

“Food technologists will identify the proportion of ligny, water, cyanide and the proportion of toxic chemicals in it and after all the processes,  the product is packed and numbered by NAFDAC. You will discover that this processes are not there, we overlook them.

There is no control, no standardization. It is the constitutional responsibility of  NAFDAC. They must go out, form synergy with agricultural agencies like our institution who will give skill of preparing these things to farmers or producers to ensure quality control,” he said.

According to him, agencies like Standard Organisation of Nigeria (SON) and Consumer Protection Agency  were not living up to expectations, adding that their function is to make sure consumers get value for the food or product they buy and if there are infractions, they will take it up with the producers.

“That is why if you are producing food, you must have a label, the address, the NAFDAC number and the expiring date so that the source will be traceable,” he explained.

He suggested that NAFDAC and SON should liase and establish a food technology laboratory in each state so that people could go or their staff could take sample of food and analyse the components.