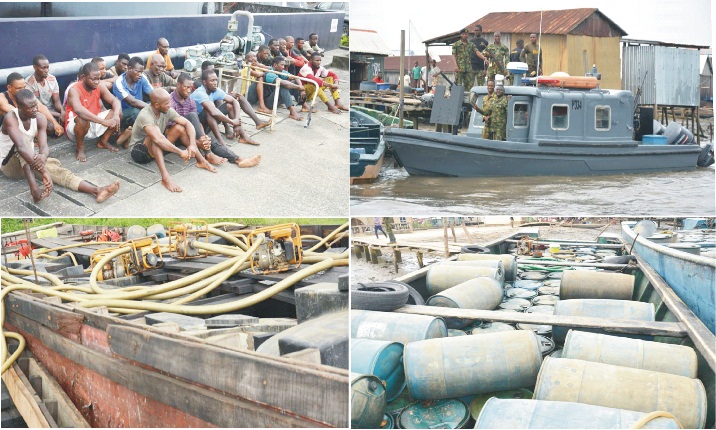 The Nigerian Navy in Igbokoda, Ondo State, have intercepted six boats loaded with over 100,000 litres of Automotive Gas Oil, popularly known as diesel along Ondo/Lagos coastal axis.
The anti-patrol team of the Naval base also arrested and paraded 24 suspects in connection with the intercepted products.
The suspects are: Kolawole Edema, Ikuesan Afiyinfun, Aganmayo Feranmi, Ayo Ogungbamila, Destiny Akinfolu, Ehuwa Eyiwunmi, Fayowole Omoderu, Bright Agbejoye, Oriase Owoyele, and Kayode Omoteshe.
Others are: Sunny Ogundayero, Ikuesan Ayofe, Friday Ogunsemori, Monday Stole, Oris Charles, Happiness John, Ayeyiwa Elumaleru, Ayeni Joseph, Joseph Andrew, Alebosun Adewale, Olowofunyekun Anthony, Ayeni Abu, Dayo Otododo and James Oritsegbami.
Parading the suspects at Abereke sea in Ondo/Lagos waterways, the Commanding Officer of the Base, Navy Captain Shuaib Mohammed Ahmed said six boats carrying illegally refined crude oil, owned by bunkerers were nabbed during the Navy personnel’s routine patrol on Ondo-Lagos open sea channel.
He said the arrest was in line with the Nigerian Navy’s mandate in curbing illegalities in the coastal axis.
He further listed other seized items to inçlude : one Cotonou wooden boat containing 16 GP tanks of 4,500 litres of products suspected to be illegally refined AGO, one Cotonou firbre boat containing 150 drums of 250 litres each of products suspected to be illegally refined AGO (diesel), one pumping machine.
According the the commanding officer, five pumping machines and two 115HP and one 85HP outboard engines, 80HP Yamaha outboard engines, 90 Horse Power (HP) and two empty GP tanks, one blue Cotonou fibre boat containing 120 empty drums of 200 litres each, two speed boats with 80HP, 75HP Yamaha outboard engines and two 75HP Yamaha engines, were seized from suspects.
One of the boats contained 150 drums of two hundred and fifty litres of refined Automotive Gas Oil, popularly called diesel.
Another wooden boat containing 16 tanks of 4,500 litres of diesel was also intercepted.
Other boats seized by the Navy were full of empty drums.
He said, “In order to effectively curb illegal oil bunkering, sea piracy, kidnapping and other criminal activities in Ilaje and Ese-Odo Local Government Areas of Ondo State, the Forward Operating Base, FOB of the Nigerian Navy in Igbokoda, instituted a continuous surveillance on the creeks and coastal areas.
“This effort yielded positive result, with the latest operation carried out along the Ondo/Lagos coastal axis.
The Commanding Officer sought meaningful information from residents that could curb all forms of economic sabotage in the area, assuring that “the operation base will continue to work in line with its mandate of ensuring a secured maritime environment.”
Some of the suspects said their boats were hired by the bunkerers, while some admitted their involvement in the illegal business.