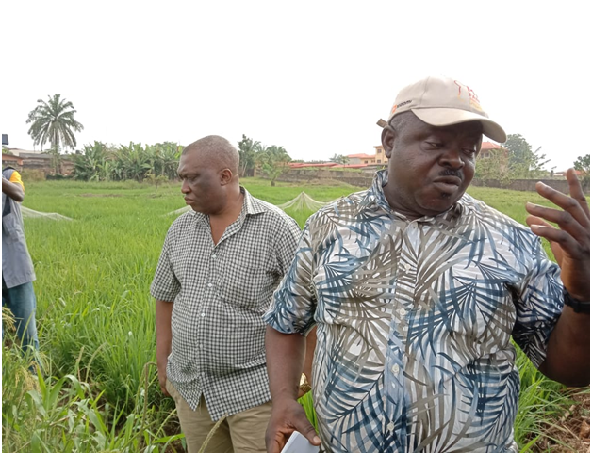 The National Center for Agricultural Mechanization NCAM, Ilorin Kwara State has called on the Ondo state government to ensure that it encourages rice farmers with starter pack in cash or in kind.
The Director of Engineering who is the National Coordinator of Sawah Eco Technology for rice farming, Dr. Segun Yinka Ademiluyi, a collaborator with the state government on the new technology, gave the advise in an interview with The Hope.
Ademiluyi who was at the farm demonstration site behind the Akure South local government area in Akure, the Ondo state capital, said government is expected to assist farmers with starter pack either in cash or in kind because most farmers may not be able to afford it.
According to Ademiluyi, sufficiency depends on the government to give necessary support where needed because there is need to expand and increase production.
He said the technology is demonstrated in four sites in Akure; two at St. Dominic’s at Aule and the local government sites where Faro 52 winter 3 type of rice is used for demonstration.
Sawah technology, Ademiluyi explained has been in operation since 2010, but got funded by the administration of President Buhari to promote the technology which has covered 22 states of the federation.
He said the technology avails farmers the opportunity to plant four times within a year and encourages the use of low land around the perennial river which does not get dry throughout the year which gives more yields and continues to increase yearly.
Ademiluyi also advocated the system of Rice fish culture, a system of establishing fishing within the rice farm which he said is advantageous to both farming system.
Reacting, the Senior Special Assistant to the Ondo State Governor on Agric and Agricbusiness, Pastor Akin Olotu assured of government’s commitment and support for anybody or farmers who is into rice production, just as he noted that government can not directly go into rice cultivation which is not sustainable like with an individual.
Government, he said, wants to boost rice production in the state and the country, and wants farmers to make more money and to put low land into rice cultivation which he noted is agribusiness and to create jobs for the people.
Explaining further, he declared that the site was to demonstrate and showcase the Sawah Rice technology which he confirmed has tremendous advantages over the conventional method used to plant rice.
While calling on farmers to embrace the method to boost production, he said “What we have here today had proved that Ondo state will be self sufficient in rice production which is a message we have absorb because without production there is no blessing”
Olotu declared that the system showed more yields because a stand of it has between 22 to about 50 panicles whose leaves are small with many paddy on them.
The Vice chairman of Sunshine Rice farmers Association, Mr Yinka Labiran and a graduate rice farmer, Mr Amuda Akinwale who were at the site, applauded government and the collaborating agency, saying the system will be a great boost for farmers starting with a small farm to experience a bumper harvest.
They urge farmers to embrace the laudable technology which they said will not only boost rice production, but would improve their standard of living.