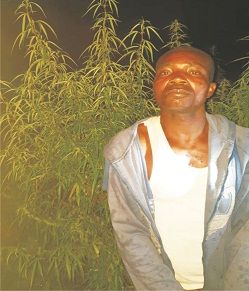 By Tola Gbadamosi
|
The National Drug Law and Enforcement Agency (NDLEA) Command in Ondo State has  destroyed 106 hectares of Cannabis Sativa (Indian Hemp) farms and 45kg  of the weeds  in the state.

The Commander of the agency in the state, Mr Haruna Gagara   in a chat with The Hope  Metro,  said  the  farms were located at Bolorunduro community in Akure North  Local Government area.

He also said four  suspects were arrested in the farms, while they were harvesting the illicit weeds.

The suspects, according to the NDLEA boss are; Friday Azum, 30,  Friday Umuvole,  26; from Orogunmentu community,  Uba Abanum also from Undokua community in Delta state including John  Akor 29, from Idanre, Ondo State, were arrested  with  45kg of cannabis .

His words: “The  cannabis were seized from the suspects, while 106 hectares of fresh  hemp cultivation were destroyed.

The NDLEA Commander,  said the agency was ready and will do everything within its powers to ensure that the state is  free from the illicit  drug.

Gagara  called on  community heads, chiefs and youth leaders in the society  to be  vigilant and always be mindful of who they lease their lands to, warning that “ignorance will not be an excuse when  arrested.

He further warned that anyone found culpable will be prosecuted regardless of how highly placed, just as he  said that the suspects would be charged to court after investigation.