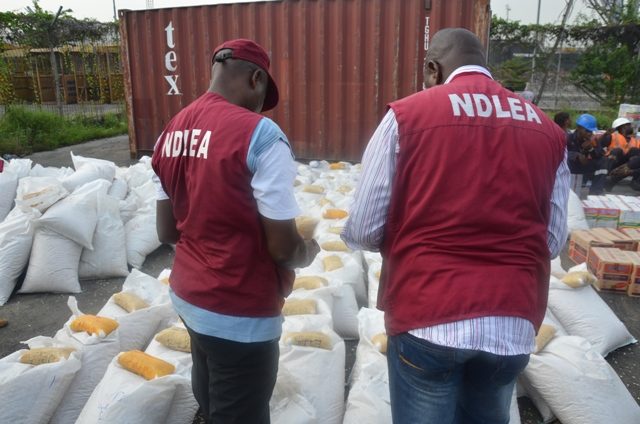 The Hope Metro gathered that the suspects; Mathew Donuwe, 38, and Friday Nbogwu, 26 were apprehended with the consignment loaded at Ogbese, Ondo State.

An authoritative source revealed that the suspects were nabbed by officials of the agency at Girei, in Girei Local Government area of Adamawa State.

The suspects, upon their arrest claimed that they were on transit from Ondo State over a month, hoping to deliver the consignment at Mubi, Adamawa State.

In the same vein, operatives of the NDLEA in Oyo State, on Friday intercepted 608-40kg of cannabis sativa concealed in a black Toyota SUV with number plate Lagos MUS 553 GN, parked around toll gate area, Ibadan-Ife expressway, Egbeda Local Government Ibadan.
The following day, operatives equally seized 85.90kg cannabis recovered from the boot of a Nissan Primera car, Lagos FJK890DZ and in one of the rooms of an apartment where search operation was carried out at Adegbayi area, Alakia, Egbeda LGA.

Chairman/Chief Executive Officer of NDLEA, Brig. Gen. Mohamed Buba Marwa (Retd) has commended the officers of the Ondo, and Oyo commands of the Agency for their recent efforts.