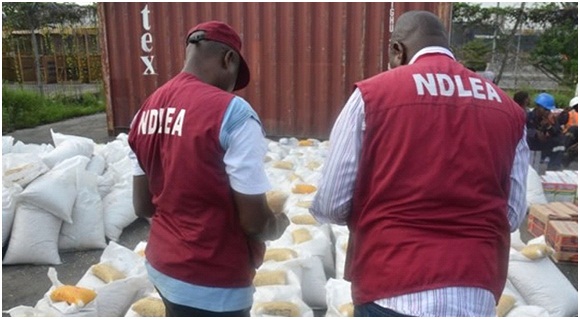 The Ondo State Commander of the National Drug Law Enforcement Agency (NDLEA), Mr. Haruna Gagara, has disclosed that the Command has arrested 60 suspects engaged in drug trafficking, while it seized 3,770.39kg of cannabis and 128kg of illicit drugs in the last quarter of year 2020.
The NDLEA boss made the disclosure in a statement signed by the Command’s Public Relations Officer, Mr. Ekechuku Wilson, a Superintendent and made available to The Hope Metro in Akure said that the suspects were arrested between October to December 2020.
Gagara noted that the suspects are made up of 52 males, including eight females who were involved illicit drugs and psychotropic substances while 3,770.39 kg of cannabis were destroyed and 128kg of skutchies seized, adding that 13.8kg of monkey tail was also seized.
He said that four vehicles and one Honda motorcycle used for transporting illicit substances were also seized.
According to him, a breakdown of the seized drugs are: cannabis (3, 770.39 kg), Skutchies (128 kg), which are concoction of Codine, tramadol, Ethanol, and so-called black Currant juice. 13.8kg monkey tail with Cannabis sativa mixed with local gin 1.190kg of psychotropic Sketchiness.
He said that the agency had successfully prosecuted 15 suspects convicted at the Federal High Court, Akure Division adding that 107 cases were still pending.
That the activities of the Drug Dependent reduction indicated that 5 drug-dependent people had also been counselled and reunited with their families, while five other people are currently undergoing rehabilitation.” he said.
Gagara lamented that the drug menace was not showing signs of abating, calling on stakeholders to strengthen cooperation in the fight against illicit drug production, trafficking and abuse. His words Cases of drug abuse are also posing greater challenge daily as more victims are getting trapped in the web of drug abuse.
“This calls for greater commitment on our part to resist the activities of drug cartels. Drug seizures in the state are on the increase I urge the good people of Ondo State to join hands together with the command for us to push out the circulation of illicit drugs in the state.
He appealed for increased funding and logistics support to the command to enable it surmount its problems.