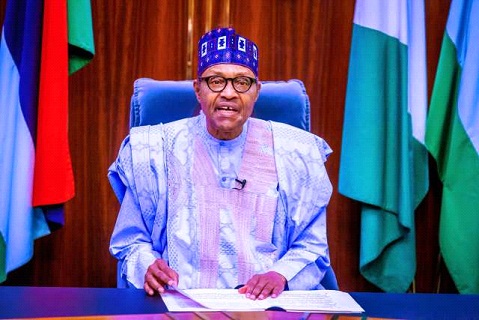 President Muhammadu Buhari yesterday, said the caretaker extraordinary convention planning committee of the ruling All Progressives Congress-led by Governor Mai Buni has succeeded in bringing a new atmosphere of hope to the party.
He also asked the leaders to respect party decisions.
Buhari said this in his opening remarks at the meeting of the party’s National Executive Committee at the Presidential Villa, Abuja.
The President expressed delight that through the efforts of the 13-member committee set up on June 25, 2020, many party members who had earlier defected from the APC had returned while others have also declared for the party.
He said what was needed now was for party chieftains to display discipline and sustain the tempo.
The President said, “I have received periodic briefings from the caretaker extraordinary convention planning committee, as well as other leaders of the party.
“I am convinced that in the last five months, since the appointment of the caretaker committee the initiatives taken have brought remarkably new atmosphere of hope in the party.
“Healthy debates are now taking place and the potential for organs of the party to affirm majority positions as the decision of the party is now possible.
“What is required now is for all of us as leaders of the party to maintain discipline and ensure that this new momentum is protected, sustained and the decisions of party organs are respected by every member.
“Despite the challenge to restore peace in the party and the series of elections at hand, the fact that we have gained more members and that we are not losing members to the opposition under the present interim leadership, indicates improvement of the party.
” In fact, we have begun to win back our members who left us and other notable political leaders are being attracted to our party.”
Buhari appealed to party members at all levels to make sacrifices that will move the party forward.
He added, “I want to appeal to all our party members and leaders at all levels, to try and make the required sacrifices so that we are able to collectively restore our progressive and democratic political party, which can nurture and give expression to our collective dream of building a strong, united and developed Nigeria.
“May I use this opportunity to remind all of us of the need to recreate our negotiation secret of 2012, 2013 under our legacy parties. What guided our success to achieve the merger that produced the APC was the respect we were able to have for each other.
” In those times, decisions reached at both formal and informal consultations were respected with trusted initiatives taken and believed that they were needed to produce the required political platform that could guarantee electoral victory.
“Everyone of us as leaders ensured that those decisions were respected.
I have through consultations of the caretaker committee and other leaders of the party, agree that our challenges in the party require that we take steps to rebuild the party from wards to national levels.
“The initiative to carry out membership registration revalidation is, therefore, necessary, membership registration revalidation will lay the foundation for reorganizing our membership from ward to local government, state and national levels.
“The responsibility of our party’s NEC at this meeting is to adopt and dispassionately consider all proposals submitted by the caretaker committee and grant all the necessary approvals requested to rebuild the party.”
To this end, the President said he would be moving some resolutions for consideration and approval at the meeting that has since gone into closed doors session.