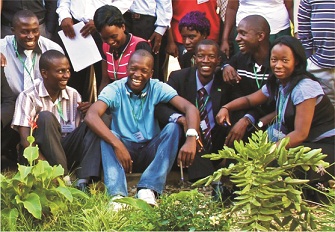 By Maria Famakinwa
|
The alarming rate at which youths across the country are getting involved in criminal acts is becoming worrisome to concern citizens.

Days ago, social media went wild with the reported case of 77 Nigerians arrested in the United States of America for cyber crime. There also came another sad news that 23 Nigerians are on death row in Saudi Arabia over drug-related offences, majority of whom are youths whose shoulders lie the future of the country. Atrocities being committed by youths across the nation have assumed a frightening dimension that a week will not end without such disheartening  reports. Youth are being carried away by appealing offers to leave a flamboyant life, hence their involvement in cyber crime (yahoo), robbery, rape, rituals among others.  Many have blamed this development on the  get -rich-quick syndrome among the youths, while some blame it on bad governance, unemployment, poverty, neglect of parental role among others.

The Hope spoke with some people on this development .

A teacher, Mrs Yemisi Atiba, who revealed that many youths are no longer interested in making money the right  way, blame  most parents for failing in their responsibilities. “Most parents now celebrate their children’s  ill- gotten wealth, without finding out how and where they get such money. That is why you see youths in their early 20s riding latest cars their parents cannot afford. All that matters to most parents is that their children are in money and can care for their financial needs,  forgetting that whatever you build under a questionable conduct will soon become an history.

“I am not surprised when I read that majority of our youths were arrested for cyber fraud. I can even tell you as a teacher that the mentality of getting rich quick in our youths today is affecting the country’s standard of education. Many of them hold the view that certificate or no certificate what matter most is comfortability. This is why I strongly support that our youths  need attitudinal change, because it is only what you struggle for that lasts. Let there be yearly youth summits in secondary schools and higher institutions where they can be counseled on the need to shun vices. “

Sharing a similar sentiment, a parent, Mr Sunday Odewale, who lamented the ugly development, observed that many youths are moving on a fast lane to destruction and warned that steps must be taken urgently if we are really hopeful of a better future. Mr Odewale, who said that everyone must be blamed for the society’s woes, maintained that our youths are the products of the society and that no one is exempted. “Today’s youths want things done in the fast way because the elders are living a life not based on good characters.  Nobody talks  about virtues and moral values again, all we do is to celebrate riches without considering the sources. Youths also want to be celebrated, they want to be heard and must cut-corners to be rich at all cost. I was bitter months ago when I saw a youths being paraded on the television by the police for various criminal offences.

“These are teenagers and undergraduates, expected to be busy with their studies. One of them, aged 18, led his friends to rob his father, to extort money from him, to tell you how degenerated and sorry situation our country is. But I am always optimistic that things can be better no matter how bad it is presently. There is need for youth orientation to immediately curb the vices ravaging our land. There is need to let our youths realise that the future of the county rests on their shoulders, which they must uphold with strength to succeed.

“We the elders are also not left out in this re-orientatation, let it start from us. Let our youths learn from us that there is dignity in labour. There is need to teach our children morals, values and let them understand that bad company corrupts good manners. Religious bodies also have roles to play in re-building our youths through emphasising on ethics and values that are missing among the youth today, rather than celebrating affluence.”

In the submission of a youth leader, Mr Segun Akingbola, who described the recent arrest of 77 Nigerians in USA for cyber crime and 23 Nigerians on death row in Saudi Arabia as pathetic, blamed bad governance for this development as he hinted that if the economy of the country  he does  not see any reason to leave the shores of the country seeking for greener pastures. “Many youth believe that we are in a country where hard work does not pay but smart work. I am not supporting youths going into crime but not everyone can endure a tough situation.

“What do you make of a country that keeps turning out graduates in their thousands yearly without a job? That was why I insisted that the government should be blamed for this. If you find out, you will discover that majority of those arrested for one crime or the other are frustrated graduates who want to survive at all cost. Do you know how many Nigerians who had died while sailing through the coast in order to run out of the country? These are the sailient issues we are not addressing. As far as I am concerned, youth attitudinal change cannot be achieved without good governance, otherwise, the situation will be getting worse. I could remembered years ago, when the USA government wanted to send some Nigerians standing trial for various offences back to the country to continue their trial  they refused. They said they preferred to die in the USA prison than sending them to their own country to continue their trial. That pointed out how disgruntled Nigerians youth are about their country. Agreed, youths need attitudinal change,  but it must start from our leaders.”

In her opinion, a counselor, Mrs Jumoke Idris, who viewed cyber crime as a global development that is becoming a global threat due to the high level of youth involvement, opined that the image of the country has never been this bad,  and suggested that everyone has a role to play for youths to have an attitudinal change. ” It has become imperative now for our youths to have a change of attitude. Most youths are so money- conscious that they do not want  to start small and grow big. They are always in a hurry to cut corners,  even when they have to do the unbelievable to make money, which is the reason they are into Yahoo, stealing ladies pants and all sorts  of nauseating acts  to get rich.

“No country will be happy that her youths are being killed by other countries due to crime, even the family feels the pain most, that is why parents must wake up from their slumbers and train up their children in a godly way. Parents should stop comparing their children to others who are making it so as not to force them into crime, because what works for A might not for B. Parents should also try as much as they can to give birth to the number of children they can cater for,  since findings show that most youths who are into crime are the ones fending for themselves. In such a home, parent’s legitimacy becomes questionable, ble since they cannot provide for their children’s  daily needs.

Religious centres should also preach more on morals and values, especially during youth camp. Government on the other hand should improve the economy so that foreign investors can be attracted to the country, thereby creating jobs for our teeming youths. Doing these will force our youths to embrace positive attitudes, since the economy is growing,  and discourage them from moving out of the country to seek greener pastures.”