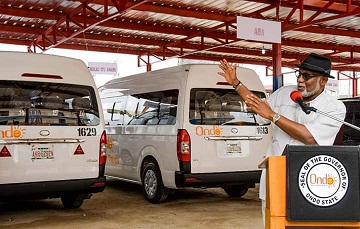 The Ondo Sunshine Travels Ltd (OSST) which is a Public Private Partnership between the Ondo State government and Peace Mass Transit, has a fleet of buses for inter and intra-state travels for the people. It also has facilities such as free  accommodation where passengers who journey into the state late in the night could spend the night in Akure before proceeding to their destinations.

Speaking at the flag-off ceremony of the operations of OSST bus terminus along Oyemekun Road, Akure, the Ondo State capital, Governor Akeredolu said the scheme was another successful testimony of his government’s investment drive to open up the state for various investment opportunities.

He disclosed that the step became necessary in view of the desire of his administration to continually embark on developmental projects and initiatives that would be of great benefit to the people of the state, just as he described transportation as the driver of the economy and one of the potent means of conveying both human and material resources from one place to another for productive means.

The governor said: “The state government had to look for other ways of achieving the goal of a ‘state carrier’ having seen how the defunct Owena Mass Transit, which the state government launched 35 years ago, failed which  became unsustainable for the government to run.

“Since the inception of my administration we have determined to make Ondo State the destination of choice for investments by making it a major economic hub for Nigeria and West Africa.

Towards achieving this goal, Akeredolu said the Ondo State Development and Investment Promotion Agency, ONDIPA,was established to serve as its investment arm and a one-stop-shop for prospective investments for the purpose of creating jobs and adding values to life for the people of Ondo State.

He explained that the new transport scheme has provided employment opportunities for the people of the state, as over 95 per cent of the drivers employed are indegenes of the state, just as he  disclosed that the new scheme is a driver/owner initiative in which the bus drivers could be the owners of the buses after paying install mentally for a few years.

“We have been working to foster various projects in the state in different sectors, as we all know, health, transport, infrastructure, agric, ICT, mention it; all with the view to transform and position this state as a major economic hub in Nigeria and West Africa at large,” the governor stressed.

Akeredolu equally used the occasion to inform members of the National Union of Road Transport Workers, NURTW, in the state that the coming of OSST would not in any way impede their business operations, but rather complement it by way of providing jobs for their members who are not productively engaged.

The Chairman, Ondo State Sunshine Travels Ltd, Chief Samuel Onyishi explained that he came to invest in the state because of governor Akeredolu’s favourable disposition to investors by creating enabling environment for private investments to thrive in the state, stressing that the investment would further bring sunshine to the state.

In their separate goodwill messages, the duo of Oladapo and Soji Oladunni, drivers of the new busses, appreciated the governor for his support for the investment with a promise to make good use of the vehicles to achieve its purpose.