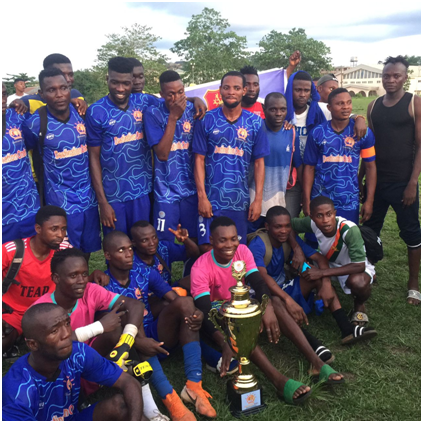 Newtown won the competition 6-5 in a penalty shootout after both sides played a barren draw in the regulation time.

The final of the grassroots competition was witnessed by large spectators at the Adeyemi College of Education Sports complex, Ondo City.

The street had earlier defeated Lokun 1-0 while the second runner up Yaba got a better side of Odosida with same goal margin on their road to the final.

Dele Ajayi promised that State FA will support the second edition of the competition and urged other philanthropists to take a cue from the sponsor of the competition, Mr. Wanle Akinboboye and support government at all levels to develop grassroots football.

Earlier the Sponsorer, disclosed that the competition will not be one off tourney.

He added that the competition will be rebranded and become the best grassroots football competition in the state.

“It will be played yearly in the Kingdom,” he said.

Ondo West FA Chairman, Bobola Akinfolarin thanked all the participating teams for their character since the kicking off the competition over seven months ago.

He disclosed that the outstanding players from the 27 teams that participated in the competition will form a team to participate in the state’s FA Cup.

“We are doing this to further develop them in the round leather game We will continue to monitor them for future development. Their future is bright,” he said.