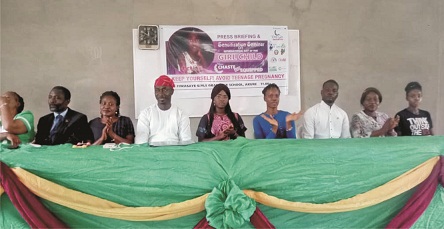 By Lola Omowaye & Bukola Olamona
|
A Non-Governmental Organisation (NGO) has urged government and stakeholders to create a safety-net for girl-child development.

The Executive Director, Kids and Teens Resources Centre,Martin-Mary Falana, made this appeal while addressing stakeholders present at an event to mark the International-Girls Child day held on Thursday at Fiwasaye Girls Grammar School, Akure, the state capital, tagged ” Giving Skills to Girls”.

He implored all and sundry to invest in the education and acquisition of skill for girls to set them on a path of achieving their full potentials in life, and career, thereby remove gender barriers on their way.

Falana called on religious leaders, community leaders and the Civil society to organise programmes to sensitise and train parents of teenagers on how to start teaching their children, especially the young girls on sex education early enough before they become prey to sexual predators.

According to the convener, “the girl child is most hit with the prevalence of all forms of violence against children. Their physical development from puberty has made them more vulnerable as a result of lack of sex education by their parents.

“Despite her struggles and hard life, when given the same opportunities as boys, the girl-child has proven to be just as strong as the boys. She is brave, intelligent, innovative, resilient, and never succumbing and has broken through burden.

‘Developing a skilled girl force requires a multi-sectoral engagement with the law enforcement agencies, the government and the community.

There is a high prevalence of violence against children in Nigeria.

Approximately six out of every 10 children experience some form of violence. Violence is rarely an isolated incident – The majority (approximately 80 percent) of children who experience physical, sexual or emotional violence in childhood multiple occasions.

Every State in Nigeria should develop their own specific action plans to address violence against children and particularly girls.

As the girl is going to school, we are calling on government and other stakeholders to train the girl child in a skill. Let her learn something in addition to the education she’s acquiring. This will allow them to have a better future. She is a human being and deserves no less.

Government is doing their best but they need to do more to create a safety net for girls as they grow up. Despite the efforts of government, we still have issues of rape leading to murder in some cases.

Killings among children, molestation and defilement of girls by their fathers, cases of boyfriends taking girls for rituals. According to the surveys we have, girls are not safe, the schools, churches honestly are not safe for our girls anymore.

Also speaking, the Director of Revive Girls Initiative, a Student of Federal University of Technology Akure, FUTA Miss Bukola Adewoyin ,said preventing and responding to violence against children in Nigeria will require a multi-sectoral.

She stressed that government should invest more in girl education, adding that perpetrators of violence are near and known.

The event was witnessed by staff of Ondo State Agency for the Control of AIDS (ODSACA), Ministries of Health, Information, Women Affairs and Social Development as well as the civil society organisations.