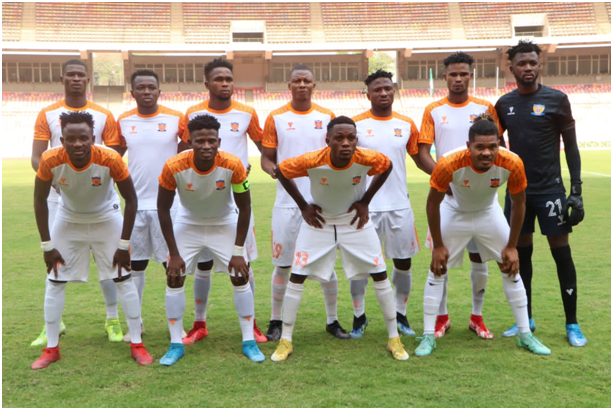 The game opened up early for the Deji Ayeni’s tutored boys and in the  12 minutes, Samson Olasupo received well in the area, only to be denied by a last ditch clearance. Then six minutes later Ikenna Cooper went close with a decent chance but his effort was just off the mark.

Olasupo was denied a beautiful goal after 34 minutes of play; his diving header off Habeeb Yakub’s cross beat the goalkeeper, but Tornadoes were helped the upright.

The League Bloggers Player of The Month (LBA POTM )Mustapha Lawal had to be at his best to turn away a fierce free kick in the 36 minutes, moment later Bolu Sholumade spared Sunshine Stars’ blushes with successive goal line clearance, following a melee in the 18 yard.

The visitors were rescued by the frame in the 39 and 61 minutes as the Ikon Allah heightened the search for a breakthrough in the closing minutes of the first period and early stages of the second half.

Mustaphal Lawal produced another brilliant save in the 71 minute when he stopped a header from close range with great reflexes.

Regardless of Tornadoes desperation to get the advantage, Sunshine Stars did not stop creating and could have broken the deadlock through Kamoru Adebari who miscued inside the area seven minutes from time.

The contest looked set to end goalless until the visitors were stung in stoppage time following a failed clearance the hosts capitalised on, to set up Idris for the winner.

In a chat with newsmen Sunshine Stars Coach, Deji Ayeni said ” I’m not really sad because the boys played according to the tactical approach of the game. You lose some, you win some and draw some; that’s football. We will go back home and concentrate on our next game.

“The game was Okay, Niger Tornadoes gave good account of themselves too. They really needed the match and we needed it too, so that brought about a keen contest. We lost and we leave it for another day.”

The Akure landlords will be eyeing a return to winning ways when they renew acquaintances with Kwara United at home on Sunday.