Home Column Nigeria in the eyes of proverbs 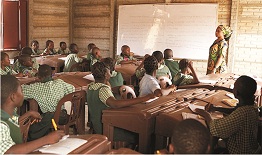 Nigeria in the eyes of proverbs

By Bayo Fasunwon
|
In the past, the Nigeria educational system seemed to be built around the development of human character for public service and the imbuement of intellectual proficiency for the positive transformation of the society. To this end, many tertiary institutions seek to produce graduates of good character and learning.

However, one cannot be too sure that these principles underline the learning that goes on in the profit making citadels of learning in this software age. That would be a discourse for another day. However, what caught my attention was the emphasis on proverbs, idioms and wisecracks in the development of the minds of the students of yesteryears. They were taught to speak less and say more; hear less, and articulate much; see less and see the whole.

Up till now, the students of yester years have not forgotten to ‘make hay while the sun shines’, understand that ‘it is a bad worker that complains about his tools’ and that ‘a stitch in time saves nine’. But, the students of nowadays are more conversant with ‘gbe body e’, and ‘awon omo science student’. They have become noisemakers, which talk much and say little; chattering without making sense and thinking without reasoning.  Unfortunately, the negligence of these wise sayings, in learning and in practice is also the bane of Nigeria’s underdevelopment.

Successive governments in Nigeria have not imbibed the wisdom in the saying that a stitch in time saves nine. By personal observation, Nigeria does not take the backseat in building structures, constructing roads or building rail tracks. At any time in Nigeria, one would see that capital projects are ongoing, even if at a slow pace, but we are always constructing something.  While the quality of these constructs may be a subject of debates and discussions, a common denominator of these constructed edifices is the lack of maintenance. The maintenance culture is a way of life that is foreign to the Nigeria government and her people. Spending on maintenance seems to be an anathema in Nigeria. Rather governments would rather wait until a hitherto tourist attracting edifice becomes a cattle ranch before thinking of ‘reconstructing’ for modern use.

A Nigerian stood in awe as he watched the scrapping of a pothole free road in a foreign land. This road was being scrapped so that new asphalt and tar could be laid on it. Curiosity and the realization that this road was better than the dual carriageways in Nigeria, prompted the Nigerian to enquire for the reason behind the road’s deconstruction. He was informed that though the road looked neat and well, records showed that the expiration period for the road was twenty five years, and its time was up.

So, the roads were being peeled, despite the absence of potholes, so that another road that can last another twenty five years is constructed. The Nigerians burst into tears. In Nigeria, government seems to accept the fact that a road can expire. Roads are constructed with a perception that these are to last till eternity, hence you not see government deconstructing ‘good’ roads for reconstruction.

Rather, what hits our eyes on a daily basis is a ‘cut and paste’ activity in the name of road repairs. A road project was contracted early this year and passes by the Victory College in Ikare. A small pothole has appeared on the road, and it is not even getting the attention of the local government. Government would wait until the pothole enlarges, destroys the entire road and becomes a pit of hell before doing the needful. This scenario is prevalent and the cause of bad roads in Nigeria.

There is Federal/State Road Maintenance agencies scattered all over the country, but these do not believe in the saying that a stitch in time saves nine. The most annoying aspect is the fact that, in the guise of ‘patching’ the roads, they cut away the asphalt and leave gaping holes that become deathtraps on these roads, unattended to for a long period of time. Much drainage in the country is already filled with sand, and refuse, unpacked and unkempt. These unmaintained blocked drainages could no longer perform their intended purposes; hence the running water escapes the gutters and spills to the roads, destroying the roads. If the roads are constantly maintained, many roads would still remain viable and useful.

This attitude of non maintenance has led to the destruction of many edifices in Nigeria. The National Theatre in Lagos had become so dilapidated that the bid to privatise it has even failed. For years, the theatre had raked in money to the government due to the commerce that took place there. However, government did not deem it fit to re-invest the profits made in the maintenance of tourist centre. Now, the edifice needs a major re-construction that gulps millions of naira. This waste of resources could have been prevented if government had consciously maintained and repaired the structure when it began to show signs of distress. The Abuja National Stadium, named after the martyr of democracy in Nigeria has also become a place for animals to organize daily interhouse sports. The stadium, which ought to rake in wealth to the nation on a weekly basis is left to rust and rot before our very eyes, and lackadaisical nature of non maintenance. The cost of constant maintenance in the long run is still cheaper than the costs of demolition and re-construction.

Visit Federal, State and Local Government Secretariats and notice the rot in infrastructure and furniture. In your own interest, control your bowels, so you would not need the use of the restrooms. Lack of maintenance has turned oil refineries to museums, street lights to bird nests, hospitals to death waiting rooms, roads to death traps and water ways to flood boosters.

It is  a sign of dementia for one to spend huge sums of money on a project and refuse to spend additional little sum in maintaining it. Government should rise up and learn that of a truth, a stitch in time would not only save nine, but would also save lives.