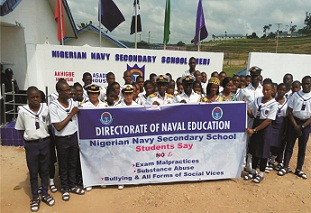 From Jimoh Ahmed, Ikare
|
The Nigerian Navy has launched a campaign against drug abuse, cultism, examination malpractices, bullying and gang violence in all its schools around the country.

The campaign was launched as part of efforts to ensure optimal performance in the force’s welfare schools.

Flagging off the campaign in Ondo state, the Chief of the Naval Staff Vice Admiral Ibok Ete Ibas who was represented by the Director of Naval Education Commodore Isa Ahmed led the Nigerian Navy Secondary School Imeri students on a speak out campaign against Substance Abuse , Exam Malpractices, Bullying , and all forms of social vices.

Admiral Ibas said the Campaign sought to sensitize the students on the dangers of these social vices in other to ensure the wellbeing, and future prosperity of the students and indeed the nation at large.

He called on the students to join hands so that together these social vices could be eliminated.

Commodore Ahmed said the directorate will not tolerate any form of vices in its schools, warning that students who are caught in gang violence and other vices will be expelled.

He urged the students to say no to bullying saying that students that are being bullied also are humans and came from homes and their parents have sent them to study and become something in future like those who bully them.

Rather than bully and engage in other vices, Commodore Ahmed enjoined the students to study hard in order to pass their examination, noting that henceforth students who did not pass will not progress to the next class.

He admonished the students on the dangers of substance abuse saying that it would make them have poor judgment, mental health disorder, changes in school performance, lung diseases and mental illness.

The Navy Chief urged the teachers to pay close attention to the activities of the learners in order to prevent them from joining cult groups and engaging in unacceptable practices.

He advised parents to make provisions for their wards so that they would be of good behavior as well as constantly monitor their wards when they are home on holidays.