Home Column Nigeria, pick up your Coat of Arms 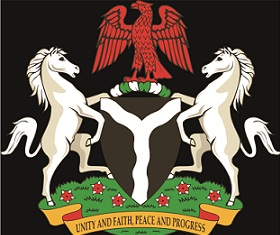 Nigeria, pick up your Coat of Arms

By Bayo Fasunwon
|
Every country has a symbol of pride. This symbol may be a picture, a flag, a personality or even a sign. All the citizens identify with it, the security officers carry it with them and public officers give it due respect and often stare at it for inspiration and guidance. For the un-initiated, it is just an insignificant object, but for the fanatic, it is a treasure worth dying for. It serves as an object of hope, strength and motivation. In Nigeria. It is sad to say that it is only during football matches that we get inspired by the national flag, the jerseys and the national anthem. Apart from these, the Federal and state buildings, calendars, security berets, few currencies and official folders bear another important symbols – The Nigeria Coat of Arms.

The designers and the foremost nationalists who accepted and adopted the Nigeria coat of arms had felt a nostalgia and hope that the crest would be burnt in the heart of every Nigerian and therefore get propelled to contribute their quota to the nation’s development. Few Nigerians know the importance and meanings of this symbol and what it stands for. Therefore, it does not provide the inspiration, zeal and seal expected to Nigerians. Often times, the security officers who carry these on their heads all the time operate contrary to the expectation of the symbol thereby making the symbol a representation of terror rather than being a force of nationalistic fanaticism. It is believed that the lack of knowledge and the aberrations attached to the symbol is a catalyst to the nation’s disintegration and backwardness. Similarly, several governments have worked and walked contrary to the expectations of the creed prescribed by the Coats of Arms. Nigeria therefore has since dropped the coat, and adorned itself with the coat of weakness.

The Red Eagle on the Coat of Arms stands for strength. The strength of the national is not determined by its size and population alone. Nigeria stands as a country that can boast of having these in commendable proportions, but could she also beat her chest as being strong.  The population is largely uneducated and disillusioned by the web of poverty in which they have been entangled.  Nigeria’s economy though, improving is still weak and unable to entertain the genuine and necessary demands of her people. Her strength is also dwindled by the fall in her oil revenues, which happens to be, though unfortunately, her mainstay. Her military, one of the most dreaded and commended in the world have suffered devastating casualties in the hands of bandits and insurgents. It is sad to note that the entire security apparatus in the country have become a shadow of itself. The strength is only manifested when it is unleashed against the unarmed citizens of her Federal Republic. Her strength that gave her accolades and gigantic simile of a giant has become in contemporary times, a beatification.

The black shield represents the abundant qualities of the land in agricultural, mineral; and solid resources. Nigeria could boast of possessing quite a large number of the various sought after natural resources of the world. But, these only represent a potential force that has not received the necessary push to generate the kinetic energy for her development. These resources were to act as a shield against the vicissitudes of life, and protect both the country and her inhabitants against the wind of depressions that blow against the continents. Many of the resources are left untapped, illegally tapped or wasted like the natural gases. In areas, where the black gold of the nation is being tapped, corruption prevents the nation(als) from benefitting from the proceeds. Homosexual leaders have either sold the nation’s resources to Shylock multinationals that exploit the greediness of the leaders, and cart away the resources without enriching the grounds that produce it.

Unfortunately, like the desertification of the once fertile fields, the black shield of Nigeria has become rustic and therefore crumbles against the swords of her vile exploiters and collaborative bourgeoisie at the periphery.

The Y silver wavy band represents the two major rivers in the country which are represented by the Y silver wavy band on the Coat of arms if properly utilized could have been a viable source of  fish and electric generation for the country and environs. Lip service over the years, and embezzled funds has been paid to the dredging of the two rivers, especially, the River Niger. Rather than been developed and used as a means of development, that God intended it for this country, the Y silver band have been annual source of flood to the communities nearby. Government had not been able to come up with a workable strategic and geophysical engineering design that could nip the annual flood festival in the bud, and transform the rivers into the silver lining for the economy and her people. The Niger and Benue rivers therefore become a canister of darkness instead of being a beacon of hope, a silver lining in the dark cloud that hovers above the nation. What an ironic tragedy.

The two white horses represent dignity. Do we still have dignity as a country or as a people. Many Nigerians, in a bid to survive, join the rat race and rub the name of the country in the mud as peddlers of hard drugs, international criminals, cybercriminals and horrific kidnappers. There are many Nigerians outside the country with good names, but unfortunately, the association of wicked Nigerians has used their notoriety to submerge the glorious garments of the few commendable Nigerians. Many Nigerians recall with tears in their eyes, the humiliations suffered at foreign airports for brandishing the green international passports of the country. All over the internet, we see footages of our ladies suffering in forced slavery in the Middle East, Libya and worst of all, India. The brightest and best brains have left their hard earned degrees and become casual workers in Europe, in order to make ends meet. ‘I am a Nigerian’ therefore becomes the reason for suspicion and degradation in the world.

Finally, the coctus spectabilis, represents a wild flower mostly grown in many p[arts of the country. It represents the beauty in the wildness of the never say die spirit of Nigerians. It represents the beauty that can come from a people tamed by the shield that rest on it. It goes on to show that the future of Nigeria rests on the shoulder of the nationals, whose beauty is being degraded by the harshness that government policies and infrastructural decay had laid on her. Like the flowers in the field, if Nigerians are picked up, rebranded and packaged, they would become the cynosure of all eyes in the international milieu.

Underneath these objects is the motto, ‘Unity, Faith, Peace and Progress. These words stand as the foundation of the country’s coat of arms. Without these four cardinal points, the nation can only grope in darkness. Let the government and the people of Nigeria therefore pick u the nation’s coats of arms, dust it and don it. The government must consciously promote and protect the unity of her people; exercise faith in her people and give them helping hands through dignity and life enhancement policies; ensure their safety by promoting peace by all means. All these would promote progress which must be a non negotiable focus of Nigeria, her people and government.