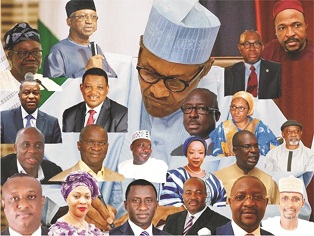 By Ayodele Fagbohun
|
President Mohammadu Buhari’s earnest call on his newly sworn-in ministers to initiate pragmatic policies and programmes that would reduce the biting unemployment rate in the country is not only long overdue but a welcome development to mitigate the alarming incidence of mass youth unemployment.

We must say without mincing words that the strident call on the ministers and on whom it may concern, falls short and far cry of the present yearnings and expectation of the people for full and gainful employment which is sine-qua-non to the material well-being and peace in the country.

In building a new and more prosperous Nigeria where mass ignorance, preventable diseases and poverty will be totally eradicated, it is high time revenue allocation be tailored and geared on the basis of even progress and need.

As it was strenuously canvassed by one-time Federal Commissioner for Finance in war-time 1967-1971, Chief Obafemi Awolowo that the Federal Government of Nigeria should be bankrolled with sufficient funds in the federation account to enable it not only to perform its allotted functions in the national interest but also to come readily to the aid of any state in need.

Chief Obafemi Awolowo, astute political genius and economic wizard of our time who managed the finances of Nigeria in war-time without borrowing a kobo from abroad, without buying a single item of military hardware on credit, without being economically weakened, was of candid view that the nation should declare and pursue national goals and objectives with fidelity to foster mutual prosperity and advancement to all parts of the country without exemption of discrimination and keep our diverse people harmoniously united.

In this regard, there are naturally many economic, political and social objectives which Nigeria must pursue to justify its existence as a state. Some of these, according to the erudite elder-statesman, the late Chief Obafemi Awolowo could be identified as fundamental and relevant to the vexed subject of revenue allocation if pragmatically and faithfully pursued will decidedly satisfy the generally acceptable principle of even progress and need.

It is generally asserted that any plan, short of the attainment of full employment to combat the annual upsurge of graduates that the nation’s tertiary institutions churn out, casts a big question mark on the integrity of Nigerian leaders and the innate ability and political sinew to be up to the task in giving purposeful and dynamic style of leadership in managing the affairs of the nation.

If it is the design and the ultimate of those at the helm of affairs to stop at reduction of mass unemployment instead of plunge into achieving full and gainful employment. It boils down to deal only superficially with the knotty, nagging and important issue of unemployment.

The question arises, who are the unfortunate victims we are planning to keep on employment market? Is it fair that some of our citizens should be left in the cold, to starve in the midst of abundant plenitude, and suffer poverty and grinding penury as a result of stark, harrowing and excruciating unemployment?

What is more, experience has shown and proved beyond logic that inadequacy and inequality in employment opportunity more than anything else breeds inter-personal, inter-state, inter-ethnic or tribal envy and bitterness.

The nation is advised to go cap in hand and learn speedily unafraid unto the feet of advanced but less endowed economies like the Great Britain, People’s Republic of China, Russia to mention only a few nations to borrow the technology or the magic wand how these nations fend for their respective counterpart nationals without compromising national integrity and sovereignty.

Towards the pursuit of even development or progress and need in search of equitable and just revenue allocation formula, and promotion of full employment for the citizenry, it stands to reason that free education at all levels and free health services should be prioritized as national objective and aspiration.

It is argued that if education and health are not free at all levels, it will be very difficult if not herculean to devise a generally acceptable formula for allocating revenue for these vital items as to ensure equal progress among states in education and health. Free education and free health services as obtained in the advanced economies will doubtless eradicate inequality and bridge the yawning gap between the privileged and less privileged and promote even progress, interstate and inter-ethnic relationship and affinity. The nation has the wherewithal to execute this lofty project given right progressive leadership in the President Buhari led All Progressives Congress (APC) administration.

The modernization of agriculture, rural development and the rapid industrialization of each state of the Federation, are very vital and important items that must be planned and coordinated to lift any developing nation from the trough of poverty to compete favourably with international community.

In his contribution to the discussion on the paper entitled “Agriculture and Rural Development submitted by Professor H. A. Oluwasanmi to the Conference of National Reconstruction and Development of Nigeria held at University of Ibadan in March 1969, Professor Glenn Johnson said: “By 1985 GDP from properly managed agriculture would probably make up about one-third of the total as contrasted to 55 per cent in 1966. Conservatively, that one-third, however would be over twice as large as in 1966.”

“In other words, by 1985, if properly planned and managed, agriculture should be able to contribute as much as 1.784 million pounds sterling, that is 179.4million pounds more than our local GDP in 1966.”

Chief Obafemi Awolowo adroitly canvassed that Nigeria’s agriculture must be modernized and mechanized in a bold and massive manner. We shall invest heavily in tractors, mechanized ploughs and ridgers, fertilizers, pest control, irrigation, research into high-yielding grains and seeds, cattle pastures and ranches, fishing trawlers, etc. To increase productivity and to raise standards of living of our peasantry throughout the Federation.

“If agriculture is properly developed in every state, agro-allied industries will automatically spring up and a number of manufacturing industries would follow suit. In such circumstances, each state of the Federation would stand to benefit and the present trend of uneven localization of industries would disappear.”

Chief Awolowo conclusion in a tone of finality that it is ardent and burning desire of those, himself inclusive in the vanguard of public life in Nigeria to serve our age and at least the next generation faithfully and fruitfully our area of concentration as between manufacturing and agriculture must ip so facto be agriculture.

It follows that President Muhammadu Buhari has touched the right chord and on the right page with the aspirations of the late sage, Obafemi Awolowo in having a high stake in re-invigorating and developing agriculture as the mainstay of the nation’s economy to be streamlined and revolutionized in all its ramifications. This will eventually trigger off industrialization of immense proportions that will totally turn around the economy as industrial giant where unemployment, want and poverty will become a thing of the past.

I am afraid our present corp of politicians at the helm are in the majority lack the discipline, courage and right frame of mind as to embark on the restructuring of the economy for effective and efficient service delivery.

Are the ministers, the dramatis personae, the public functionaries at the commanding height of the economy and in the various theatres of operation truly imbibe ascetism, self-sacrifice, transparency and probity needed in leadership to hit the ground running and serve the best interests of the populace? Only time will tell.

In the interim, President Buhari should at this time around gives a sort of independence to ministers to perform and whoever, no matter how highly placed or favoured, fails to live up to the expectation of the people that calls upon to serve, should be shown the way out and instantly face the music and the appropriate sanctions.

I insist public office is not an opportunity to make merry or money at the expense of the people nor an avenue to perpetrate sharp practices against government coffers. Which is why, there must be a downward review of salaries and allowances to political office holders across board to allow more funds for the minimum wage and other essential services that would move the nation forward.

In respect of full employment and to generate a sense of economic security, the government at all levels, must confront headlong problem of planning and imbued with executive capacity to deliver.