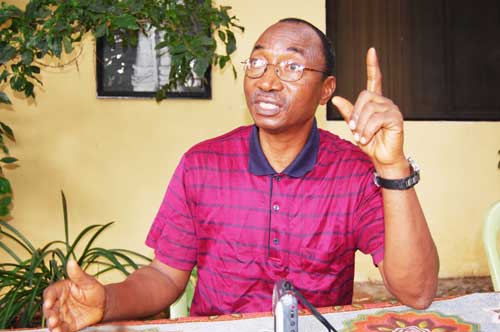 Abayomi made the appraisal in Akure during an interview with Editors of The Hope newspapers.

The Constitutional lawyer, who gave this damning verdict traced insecurity, kidnapping and other challenges threatening the country’s peaceful co-existence to the inherent illegitimacy in the 1999 constitution, which he said was forced by the military on Nigerians.

According to him: “A nation must have structure before it can be restructured. Nigeria has no structure. The only structure is what people agreed on, presently, our structure lacks legitimacy.”

He noted that the country will not get it right until the nation finds  appropriate terms and conditions for its unity.

“In the case of Nigeria, the constitution was forced on the people by the military government, and that constitution told a lie by saying: ‘We the people solemnly agree…’ This is part of the organic problems of this country”, he said.

On those calling for restructuring of Nigeria, Abayomi said Nigeria can only be restructured if it has a structure, saying the country as it is lacks structure.

The APC senatorial aspirant for Ondo North stressed that the National Assembly members as representatives of the people are in the best position to give the country its own law and the people its constitution.

The Adekunle Ajasin University Council Chairman, emphasised that for a nation to have its own constitution, the people must meet, agree on the terms and conditions of the government rather than the one being forced on them, describing such arrangement as invalid as it does not have the approval and the inputs of the people.

“It is very important to know that we are not one people, we are made up of many nations. We are different people”, Abayomi added.

On his vision for Adekunle Ajasin University, Akungba Akoko, the Governing Council Chairman said he envisions a university that is a 21st century centre for knowledge as well as a bold faculty of Ondo State and Nigeria in general.

He assured that the governing council of the state university will ensure the appropriate implementation of the white paper on the school which he said has just been sent to the council about two weeks ago.

He saluted the Buhari-led federal government for the unwavering commitment to corruption fight, describing the president as an incorruptible person.

He said despite all the important positions Buhari had held in the past, no big property could be traced to him, saying such a person is good as the President of the nation.

The legal luminary agreed that the major problem confronting the country is corruption which must be fought to a standstill.

On the people engaging in sharp practices to earn the Senior Advocate of Nigeria rank, Abayomi said he does not see anything special in becoming SAN, since he believes that it does not add any special value to him and his profession.

“I don’t run after things I consider unimportant and SAN is one of those things. It is like a professional oligarchy and it is unfair to the development of law profession.”