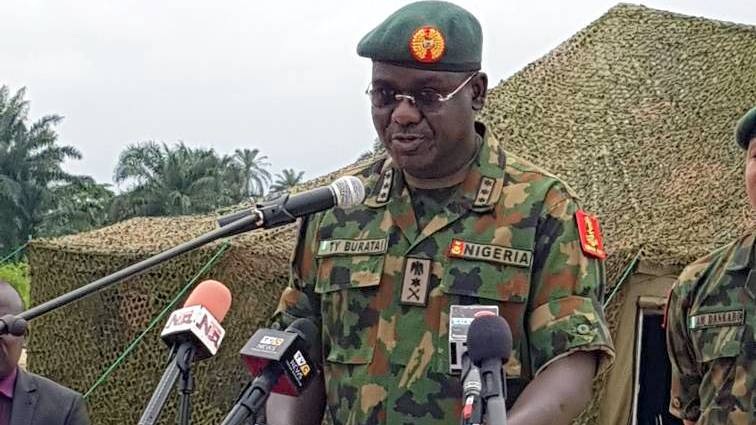 The Nigerian Army has assured of its commitment to combating insurgency and being professional in its conduct with the larger society.
Chief of Army Staff, General Tukur Buratai gave the assurance while commissioning Lt. General Tukur Buratai Bailey Bridge in Kuta, Ayedire Local Government Area of Osun State.
He also assured Nigerians of the army’s commitment to combating insurgency without jettisoning the constitution in discharging its responsibilities.
He said the Chief of Training and Operations of the Army, Lt. Gen. Lamidi Adeosun, is a competent officer, whose effort in rejigging the army paved way for the successful operations in the battle against insurgency in the Northeast.
Buratai stated that the army is ever determined to be responsive in meeting the needs of the country.
The bridge commissioned was built by the Nigerian Army Engineering Corp, Ede Osun State-linking Kuta-Ikoyi-Ede towns in the state.
Explaining the rationale behind the construction of the bridge at the gathering which was attended by Governor Gboyega Oyetola, Buratai said the army intended to foster unity between the institution and civilian population.
He added that the army has always played pivotal roles in the development of the country, especially in quality road construction across the country.
“We have a new army that is determined to be responsive and professional in the discharged of constitutional duties.
“When I was appointed as the Chief of Army Staff, I met Lt. General Lamidi Adeosun at the Northeast as the commander of the operation there and he started the rejigging processes of the Nigerian army where we commenced our upward and progressive movement toward the technical defeat of Boko Haram.
“The Nigerian Army Engineering Corp is one institution that has played a very important role in infrastructural and economic development of our country and we know the role it played after the civil war, virtually all the roads in those days were done by Nigeria engineers.
“They are professionals, experts and deliver quality as well as at a very cheap cost.
“We really appreciate the Olowu Kuta for his support to the Nigerian Army in the midst of bitter criticism, he mobilised Civil Society organizations and the media to correct the ill minds”, he added.