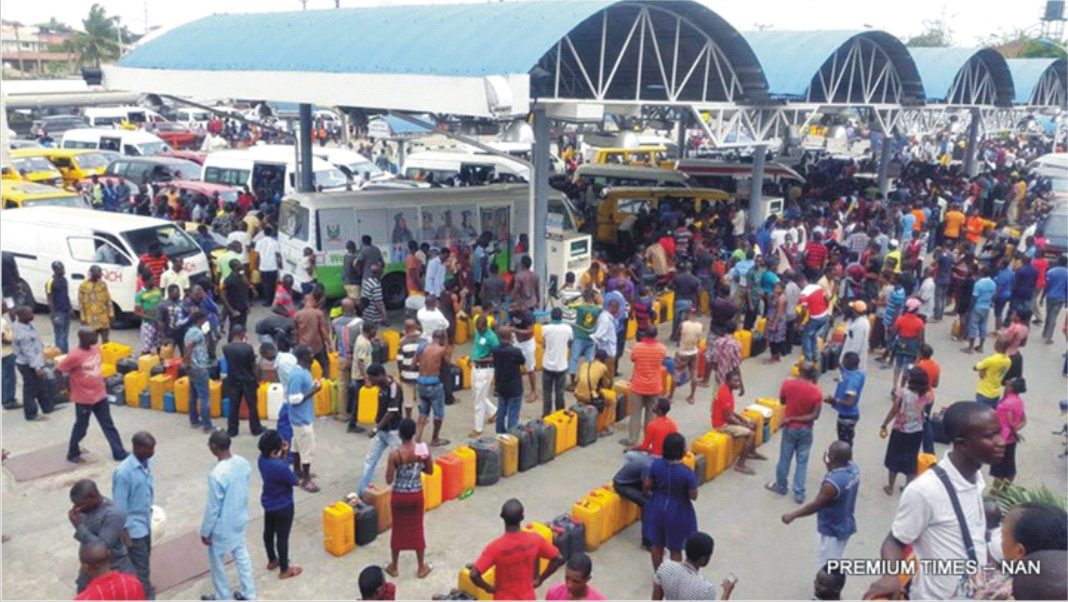 The discovery in early February by Midstream and Downstream Petroleum Regulatory Authority (NMDPRA) that petrol, with methanol quantities above Nigeria’s specification was in circulation has led to long queues in filling stations across the country.

The average Nigerian has continued to lament the lingering fuel scarcity as thousands of motorists, both private and commercial, spend several hours queuing in petrol stations in desperation to get fuel. Those who were lucky to get bought as many litres as possible to keep at home while some bought to resell  at black market.

This was the case of a man identified as Gideon Pam and his wife who were burnt to death in Zawan community in Jos. According to report, Pam, an illegal petrol marketer was called to come to a particular filling station for fuel. In a bid to empty some of the gallons that had fuel in them in order to buy another fuel ignited fire and Pam was trapped in the kitchen where the gallons were kept. His wife Mercy was also trapped in the inferno while attempting to save him.

As sad as this may be, findings have revealed that some Nigerians are still storing petrol at home to avoid the pains of queuing at the petrol stations for hours despite the earlier appeal by the Acting Controller General of the Federal Fire Service (FFS) Dr. Samson Karebo, against storing it at home.

Dr. Karebo explained that petrol is a highly inflammable liquid which if not handled carefully can cause serious fire explosions.

He said: “ Nigerians must resist the temptation of storing petrol in their homes or other confined places due to the current challenge of scarcity, as doing that will endanger their lives and that of others. As we all know that children like to experiment, so storing petrol at homes can be put them at high risk.  Nigerians risk having a fire outbreak or explosion if there is a source of ignition such as a naked flame or an electrical spark near the stored petrol,” he warned.

The Hope spoke with some motorists in Akure, the Ondo State capital on the dangers of storing petrol at home. A commercial driver, Mr Olusegun Omowanle, revealed that most commercial drivers who were lucky to get fuel at normal N165 bought extra to keep at homes.

When told that it was risky to keep petrol at home said: “It is not drivers’ fault, you should blame the Federal Government for this harrowing experience. Do you think it is easy to queue for six hours without getting fuel to buy? This is the job I do to care for myself and family.  Anytime I am lucky to get petrol at the approved price of N165, I will buy extra to keep at home. I am not new in this business, I know how and where to keep it without hurting my family.”

Another motorist, who simply gave his name as Opeyemi,  attributed the patronage of  black marketers to the attitude of  some filling stations who prefer to sell at night adding that   he woke up as early as 3.am to queue at filling station for the product.

He said: “ Though, it is risky but I keep about 10 liters at a secluded place in my compound to be used after exhausting the one in my cab. I want to blame some of the filling stations for the scarcity because they refuse to sell during the day time, but rather prefer to sell to black marketers at night.

“As a result, the filling stations claim not to have fuel during the day. They open in the night to sell at exorbitant prices  from N250 and above. If I eventually get the fuel, do you expect me to just fill my tank and drive out? I will surely buy in kegs to keep. I always have kegs in my boot in case of an opportunity. So it is with other vehicle owners both private and commercial.”

When reminded that keeping petrol at homes was not advisable, he agreed but said: “that is the situation we find ourselves in this country. How can we be suffering like this, when Nigeria is an oil producing nation? If we have leaders who feel the masses pains, this issue of fuel crisis will not have lingered till now. There is no electricity, there is no jobs, there is no food, there is no fuel, what are we actually enjoying as citizens of this country? You can read it in the faces of people that they are tired of this system that is not working. There is need for our leaders to solve this fuel scarcity urgently,” he said.

Sharing a similar view, a motorcyclist, Layo Babatunde, lamented the situation, stating that he had spent virtually all the day on queue waiting to take his turn at the filling station. He said: “Help us to talk to government. This hardship is unbearable. Why should getting fuel to buy with your money be a  problem? I have been on this queue for over five hours and there is no hope  for me getting fuel.”

Asked if he store fuel at home, he said: “ I will not be here if I have fuel at home. I have  exhausted the  ten litres I kept at home two weeks ago. That is why I am here to buy fuel in my okada and buy extra to keep.”

When told that it was not advisable to keep petrol at home he said: “Almost everyone does it. These kegs you are seeing are used to store petrol at home. One just need to be careful  as everyone now indulge in the act. Since it is not easy to get fuel, you must ultilise any  opportunity that comes your way. Commercial and private drivers including okada riders all keep petrol at home. We only pray for the situation to improve, because keeping petrol at homes is risky,” he said.