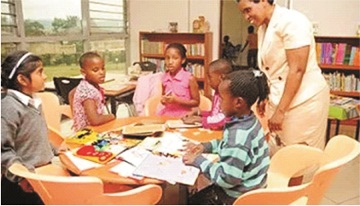 By Maria Famakinwa
|
Summer coaching popularly known as holiday lesson which usually starts a week after schools third term vacation across the country is far becoming a culture with many parents expressing divergent views regarding the reason for it.

It is generally believed that third term vacation which is more than six weeks was designed for students to relax from routine school works but holiday lesson have since proved this wrong because students are expected to be back in school a week after vacating for the third term break to continue the holiday lesson which some claimed helps them not to forget what they were taught.Those who supports the idea of holiday lesson argued that it is an avenue for not too brilliant students to double up while those against it maintained that private schools’ owners hide under holiday lessons to extort parents instead of allowing students to rest, relax and refresh their brains in preparation for next academic session.

The Hope spoke with some stakeholders in the education sector on their take regarding holiday lesson.

A proprietress, Mrs Margret Edward, see holiday lessons as the best way to keep students from trouble during long school break as she added that it is an opportunity to provide safety for pupils while parents are out in search of daily bread. “When children are free, they will look for ways of engaging themselves like watching movies which predisposes them to vices such as smoking and alcoholism. Keeping them occupied with some form of work assist them to stay away from these vices.”

On if holiday lesson serve as an avenue to extort parents, she disagreed.” It is unwise for anybody to think that summer lessons are for extortation instead of praising teachers efforts for impacting knowledge when they should be resting. After all, the lesson is not compulsory and any parents who think otherwise should not allow their wards to participate. The funniest thing is that most of the students who attend summer class refuse to pay the fees yet, teachers still teach. We should be commended for doing a noble job.”

A teacher who simply want to be identified as Mrs Ebunola submitted that holiday lessons should only be for low learners or students who perform poorly in their academic. “It is good for parents to first assess their children academic performances, doing this will guide them on making the right decision about who should attend holiday lesson. Students with excellent academic performances only need to stay at home during holiday lesson, revise their notes then rest. This is the point parents should understand.”

One of the students who support holiday lesson, Master Dayo Akindeko, revealed that holiday lesson he attended during the last vacation helped him to improve academically. “Holiday coaching helps slow learners especially in preparing for external examinations. Some schools have challenges in completing the syllabus on time and therefore rush students through everything at the last minute. Holiday lesson will help students in such schools to take their time and study to understand what they could not complete during the normal school period. My parents forced me to attend lesson during the last holiday coaching because they were not satisfied with my performance, today, I am better for it because I have improved academically. “

Speaking differently, a parent, Mrs Sola Olanipekun, who disagreed with holiday lesson hinted that too much academic work gets monotonous and affect students performance.” Learning is like working since it involves using the brain. For better performance, students must be allowed to rest. Failure to accept this fact may make learners end up having low output. In as much as parents want their children to be taught during holidays, they should be advised not to exert excessive pressure on them”.

The woman who further said that she did not belong to the school of thought that long vacation lesson serves as a reminder of what the students have been taught added that it is natural and of importance to give the brain rest for maximum productivity. “When it is not holiday, students should be in schools and when they are on vacation, they should be on vacation it is as simple as that. Some parents during long vacation  prefer engaging their children in skills like sewing, hairdressing, photography and other life enhancing skills which I think is better than enrolling them in lesson because skill acquisitions cannot be play down in our present generation.”

Sharing similar sentiment, another parent, Mr Dele Olajuwon, described holiday lesson as a way of extorting parents and creating gap in learning because according to him, only students whose parents can afford the lesson fees will be allowed in the class. “It is not a good idea because it only favours students whose parents are financially stable and makes students from poor family lag behind academically. I will be glad if the government can make a law that will prevent teachers from collecting holiday lesson fee or stop long vacation  lesson outrightly to ensure learning equality.

“However long the holiday is, it is still meant for students to rest. If the practice continues, it means some children who could not attend the lesson due to one reason or the other will be left behind and at the end affect their performance.”

A retired educationist, Mr Lanre Fatuasi, who also did not subscribe to long vacation lesson explained that the grammatical meaning of holiday has been defeated through organising lesson for students when they are expected to be resting. “Time for holiday is strictly meant for resting. Even abroad, where wealthy Nigerians send their children to for schooling do not organize any lesson during long vacation instead organise summer camps to discover other talents in students aside academic. That is why their educational system still remains envy of third World nations.

“Most schools in my own view are organizing summer coaching not because to make students serious about their studies as they often claim but because of the money they will make for the coaching period which explains why most of them  make the long vacation lesson compulsory. Work without play makes Jack a dull boy, holidays are meant for students to refresh their minds so, they need to stay away from academic work. Most of our children are occupied with loads of work during the normal school days especially those in private schools. The holiday is the time they are supposed to relax their minds and engage in other activities which are not related to class work. Students should be engaged in things that would enhance their academic orientation when on holiday and not cognitive but affective and psychomotor skills.