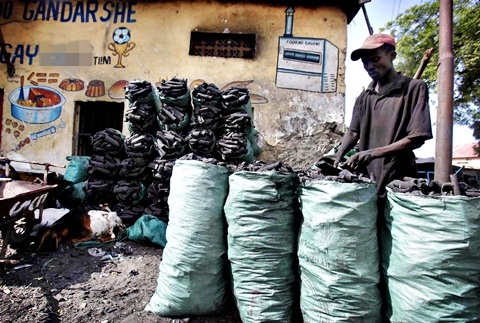 More Nigerians are now facing hardship as princes of household material for cooking such as Gas, Charcoal, Kerosene have skyrocketed, The Hope survey has revealed.
In the last couple of months, the price of gas rose from N230 to N550 per kilogramme while that of kerosene also rose from N150 to N320 per litre
Investigation conducted by The Hope also gathered that the price of charcoal has recently shot up due to its scarcity.
A market survey on the product revealed that a bag of charcoal had moved from N1600 to N2700, while train coal increased from between N4000-N6000 to N9,500.
The Hope gathered that the situation degenerated badly that hardly could anyone find charcoal of N100 from the retailers.
Users of the product lamented that aside the scarcity and increase in the price, the quality and quantity of the product have reduced.
According to a user, Titilayo Babayemi, she switched to charcoal due to increase in the prices of kerosene and gas but the price for charcoal too has increased.
She told The Hope that she could not find N50 worth of charcoal again, adding that she bought from N200 and above.
Mr Femi Ogundirahun and Mrs Bukola Ajayi similarly said since gas and kerosene were not affordable, they had result to the use of charcoal, but lamented the price was gradually becoming un-affordable.
Another charcoal seller, Mrs. Esther Fatugbiyele, the price of charcoal had skyrocketed in the last couple of months and both buyers and sellers were struggling to afford large quantity of the product.
“The new price of charcoal is becoming a problem for everyone involved in the business. Even I cannot buy as much product as I used to buy before now because the difference in the cost price is just too much.
“People are also not coming to buy charcoal from me like they used to before because they cannot afford to pay the new price without complaining. So, we only buy the little our money can afford and that is making us to suffer because we don’t have the money we need to buy the other things we need.”
“The biggest bag of charcoal now sells for N9500. The next one to it in size is sold for N2500 while a small paint bucket of the same product is N400. That is how we sell it now.
“It is not like we are wicked or something. The last time I went to market to buy charcoal, I ended up coming back empty-handed as I could not buy the charcoal I needed because of the new price and the fear of people not buying them from me. That is just the reality,” she explained.
Another seller at Odopetu market, Akure, Mrs Abimbola Adeleye also confirmed that the demand for charcoal had increased and this had contributed to the sharp increase in the price.
She told The Hope that due to the unbearable increase in the prices of Kerosene and Gas, people had switched attention to charcoal, adding that the price of the product had also shot up.
“Before the increase in the demand for wood charcoal, we used to buy a sack of charcoal at the rate of N1600. But it has increased to N2700, if only we even see it to buy,”she said
Another wood charcoal seller at Oke Aro, Ifedayo Agbi confirmed that the scarcity of wood charcoal could be attributed to the increase in its users due to the current economic dispensation.
In her words, “We also hardly see it to buy as we normally experience it due to rainy season when the Tivs, who are the major suppliers, will prefer to go to the farm.
“Some suppliers, who are not farmers, are also complaining about the activities of some forest guards who disturb them.”