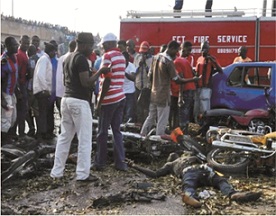 By Maria Famakinwa
|
It is now becoming a norm across the country to see some Nigerians crowding around accident scenes taking pictures or video and posting them  on various social media platform to cause panic, chaos instead of rendering assistance to victims.

The inhuman attitude towards accident victims across the country have been condemned by concerned citizens who are calling on governments to take drastic steps against what they described as callous and heartless towards fellow human beings.

Many who described the ugly trend as a  shame wonder how things could degenerate to the extent that Nigerians who are known to be their brothers’ keeper see some other Nigerians writhing in pains and think the next thing to do is to take pictures  and post it to the social media instead of rendering immediate assistance to save  lives.

Recently, Lagos Sector Commander of Federal Road Safety Corps, Mr Hyginus Omeje condemned the act of  taking pictures or video of accident victims with the aim of posting same on the social media. He termed a sad practice. He said,” Many atime, when people get to crash scenes, the first thing they want to do is to be the first person to take a picture or make a video.

”You would see many people there not rendering help. Would you rather get to an accident scene, watch and shout than render little assistance to sustain the victims before the paramedics or professionals arrive to handle the situation? An unconscious person might just need cardiopulmonary resuscitation to come back to life. Death is in seconds and if you don’t take charge of the golden minute or hour, anything can happen. I think Nigerians need to change their attitude to crash scenes.”

Those who spoke with The Hope  said that the fear of being arrested by the law enforcement agents was the major reason Nigerians are scared of helping either accident or gun shot victims.

In his contribution, a businessman, Mr Mike Efe, who condemned the act appealed to the Federal government to take drastic steps against the act as he added that some of the accident victims would have survived if urgent assistance were rendered by those around the scene. ”As a businessman, I travelled often and witnessed different accidents along the roads where Nigerians would be struggling to outsmart one another to be the first to post such a pathetic occurrence on a social media.

”Most times, those who crowded accident scenes to take pictures or video delay patrols, ambulances that are to help convey victims to the hospital for urgent medical attention.’’

”Sharing similar sentiment, a social worker, Mrs Bidemi Olusegun, who observed that taking and posting photos or video of accident scenes on social media is a common trend in the country also appealed to relevant authorities to address the growing trend urgently and nip it in the bud.

‘’We should emphasize the need to consider human dignity and the feelings of relatives of the accident victims. Circulation of accident images is deemed an irresponsible behaviour among the citizens.

”The circulation of these images is unacceptable. It can cause a psychological shock to the families of victims when they watch such images. People should consider the consequences of such uncivilized behaviour which may endanger lives. It is mental sickness to be interested  only in taking pictures and videos of accident victims rather than assisting them.”

Reacting differently, a commercial driver, Mr Yomi Amao, hinted that most Nigerians are scared helping accident victims because of past experience of those who helped such victims. ”I heard a story of a driver, who was travelling with his wife and two children along Ilesa road and saw an accident victim lying helplessly beside the road. The man packed his car and took the woman to the hospital, unfortunately, the woman died few minutes at the hospital only for the man to be arrested and detained at the police station where he spent two weeks before he was allowed to go after his bail conditions were met.

”Situation like this discourage many Nigerians from lending helping hands when it is needed. Do you think the man will want to help an accident victim again with his bitter experience? The only way forward is for the government to re-assure members of the public through various mass media that no one will henceforth be detained for helping accident victims otherwise, they will not be getting needed attention from the public.”

A public servant, Mr Olawale Sunday, explained that it is difficult to play the role of a good Samaritan in Nigeria, giving the security situation in the country. While calling on the federal government to re-orientate law enforcement agents stressed the need for everyone to be involved in safety of others. ”Though, we should all be involved in the process of saving lives, but one must think twice to help accident victims in the country.”

”Atimes when you rush an accident victim or someone with gunshot wound to the hospital, instead of first attending to the person as it is the practice in other countries, health providers will be asking for police report even when the victim is between life and death. Many innocent souls had been wasted through this unprofessional conduct.

“Health providers should be taught that not all gun shot victims are armed robbers. Even if the person is an armed robber, courtesy demand that such receive medical attention while they invite policemen later.

”Our law enforcement agents need to be reoriented on fatalities and there should be ambulances at every 20 kilometres on the road to attend to emergency. Nigerians should also be educated on the need to help accident victims promptly rather than taking pictures or video of the scene for social media.”