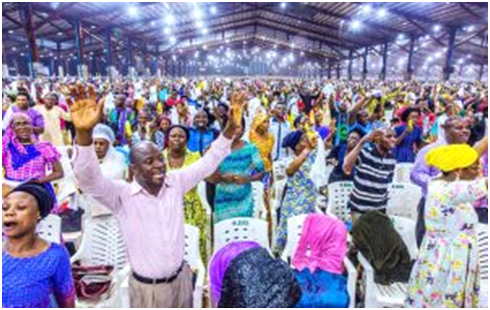 With a population of over 200 million people, which is generally believed to be the largest in any black country on earth, Nigeria has a divergent religious setting. A large proportion of Nigerians profess one religion or the other. According to statistics, an online platform that provides statistics, as at 2018, Nigeria had 53.5 percent, 10.6 percent, 35.3 percent and 0.6 percent of Muslims, Roman Catholics, other Christians and people who profess other religious beliefs respectively.

While adherents of these religions differ on basic doctrines, they also have some practices and characteristics that they share in common. One of them is fasting, a practice that involves denying oneself of food and other forms of pleasure in order to concentrate on prayer or some other religious exercise for a period.

For example, it is a common practice for Christians from various denominations to embark on congregational fasting at certain periods in a year. Some churches embark on fast that involve as many members as are able, towards the end of the year. Specifically, some observe such fast in November.  It is expected that such a fast will usher the people into a prosperous new year.

There are also denominations that observe their own fast at the beginning of the New Year, especially within the first quarter of the year. General fast like this range from three days to seven days, 21 days, 30, 50, 70 days or more, depending on the denomination.

People from certain churches that are known as orthodox churches also observe a fast called Lent. Lent usually starts about seven weeks before Easter. It begins on a Wednesday that is known as Ash Wednesday and ends on the Saturday preceding Easter.

The Lenten fast lasts for 40 days. It recalls the events leading to Jesus’ death on the cross. Derived from the Teutonic or Germanic word for springtime, Lent comprises six Sundays that are not included in the counting of the 40 days of Lent because the Resurrection of Christ is celebrated every Sunday, which has delineated Sundays as no-fasting days. This indicates that the basic Lenten discipline is fasting, which lasts exactly 40 days of the period and takes after the 40 days that Jesus fasted in the wilderness. Lent is a prescribed time of fasting, both from food and festivities. It is a “low” period.

Since Easter itself is a movable feast, though it usually occurs between March and April, there are no fixed dates for Lent. However, there are fixed dates for other fasts that are observed towards the end of the year and at the beginning of the new year.

Sometimes, there are off-season fasts which some churches also embark on, just as individuals sometimes take the initiative to fast on their own.

For instance, October last year, General Overseer of the Redeemed Christian Church of God (RCCG), Pastor Enoch Adeboye, admonished members of the church and other interested Nigerians to embark on seven-day fast for the unity of Nigeria.

The clergyman blamed Christians in the country for the current state of the nation by not praying for Nigeria. He added that with prayer as the master key, it was the “only way to heal Nigeria from the plagues that have befallen it.”

He said, “I will tell you the truth: That Nigeria is still one up till this moment is a sign of a miracle, it shows God still answers prayers.

“But if you want something and you haven’t got it yet, you will pray more. After all, He (God) said ‘pray till your joy be full, whether you believe it or not, one day, and I believe it won’t be long, our joy will be full.”

Similarly, earlier in June, founder of the Gospel Pillars International Churches and Pray Nigeria Movement, Prophet Isaiah Wealth, had called for fasting and prayer for Nigeria, to end the socio-economic and security challenges plaguing the country. The fasting was observed from June 12 to 19, making it coincide with the annual June 12 Democracy Day celebration.

It is, however, worthy of note that fasting is not restricted to Christians alone. But Muslims and adherents of other religions also have periods when they embark on fasting. For example, all Muslims fast in the month of Ramadan every year. The fast lasts for 29 or 30 days, depending on the number of days Ramadan has in a particular year.

Despite religious diversity, religious leaders have very similar opinions about the reason behind fasting, people who can or who should not participate in fasting, and the benefits, both for the individuals and the country.

According to Venerable Jonathan Agunbiade, the Dean of St Andrew’s Anglican Cathedral Church, Kabba, Kogi State, fasting is an opportunity to seek the face of God and receive vision from Him for the New Year.

He added that fasting enables people who observe it to receive provision and protection because the new year is a year that nobody has ever seen before.

While stating that fasting is for everybody, both old and young, Venerable Agunbiade added that fasting helps to renew our strength physically and spiritually. He said, “It is a period of soberness and it even helps to reduce crime because when people are fasting they tend to demonstrate self control and concentrate on God.”

In a similar vein, Venerable Joshua Olugbemi, also from St Andrew’s Anglican Cathedral Church, Kabba, Kogi State, explained that whether people fast towards the end of the year or at the beginning of the New Year, the aim is to have a prosperous new year. Explaining further, he noted that the time of the fast depends on the belief or the vision of the leader.

He said that while fasting enables people to seek the face of God and obtain divine blessings for the year, it is also important for the nation, so that God will intervene in our leadership. Ultimately, our country will prosper and it will be well with the people.

Reverend Olajuyigbe explained that fasting is meant to keep the body under subjection, saying, “When somebody has eaten and is full, there is a tendency to misbehave, but when somebody is fasting the body is put under subjection and you will no longer be able to satisfy the flesh.”

While stating that fasting alongside prayer can provoke divine intervention for our country, Reverend Olajuyigbe added that sick people can be exempted from fasting, while the aged should not fast for too long.

According to a pastor in a Pentecostal church who pleaded anonymity, people enter every new year with a hope that the new year will be better and there will be more opportunities, considering the fact that the spiritual controls the physical.

His words: “Fasting is for you, not for God. It lowers the flesh, so that one can be more sensitive to hear from God. That explains why even people from other religions also fast. Whether it is done towards the end of the year or at the beginning of the new year, fasting enables people to seek the face of God and find out His will or vision for us in the new year.

He added that anybody can fast, provided that they know what they want to achieve with it.

Damola Ojenike, a minister in another Pentecostal church, described fasting as the practice of giving up food or something else for a period of time in order to focus one’s thoughts on God. He explained that while fasting, many people read the Bible, pray, or worship in order to focus their minds on God.

According to Ojenike, Christians fast to know the plan of God for their lives, walk in line with His will and redeem the days. While noting that every healthy person can fast, he added that fasting can make God intervene in the affairs of the nation, citing some instances in the Bible.

As stated earlier, fasting is not restricted to Christians; people of other faiths also practice it.

According to Alhaji Taofiq Akintola, the Chief Imam of Police Officers Mess Central Mosque, Akure, fasting is commanded by God to all Muslim faithful. He stated further that aside bringing people closer to God and promoting unity among all Muslims, fasting makes those who are privileged feel the plight of the underprivileged.

While stating that God wants peace for everyone, Alhaji Akintola added that those who are seriously sick, women who are menstruating, the underage and travelers are exempted from fasting.

He also said that fasting gives everyone an opportunity to tender their requests before God, it promotes unity and makes us more conscious of our actions, as we will all give an account before God.

Jimoh Omole, a traditionalist, said that fasting attracts mercy from God and hastens answers to some prayers. He added that fasting can also make God intervene in the affairs of the country.