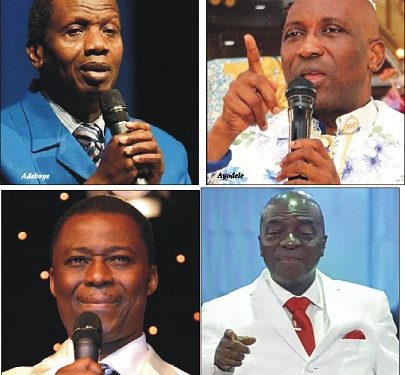 Every night on New Year’s Eve day, Nigerian Christians throng to churches in their millions to pray and listen to prophecies that they believe will guide their lives in the new year. This has become a culture and a way of life.  Almost every Pentecostal church leader gives an end-of-year prophecy.

Some of the prophecies are often non-specific and usually contain predictions of events that would most likely occur as a course of nature and societal development and transformation. A number of pastors in Nigeria engage in the annual ritual of releasing prophecies for the new year to create the impression that they can see into the future. Despite the fact that some of the clerics have descended into ignominy in the past as their predictions failed to come true, it is not enough reason for Nigerians to ignore the prophecies of men of God they so much revered due to the belief that God speaks differently to people. The Hope examined some prophecies released by some men of God for year 2023.

The prophecies of the General Overseer of Redeemed Christian Church of God, Pastor Enoch Adeboye, he foresees better days for Nigeria. The man of God while speaking during the cross over night, categorized his prophecies into World, RCCG Members, and Individuals.

In his message, the cleric said for the world , migration would take a new turn in the new year and added that the world would be “relatively more peaceful” in the year 2023. The clergy man added that the weather pattern would be”more eratic”, but it would be nice wherever God’s children were.

Regarding individual prophecies for individuals, the RCCG General Overseer during his proclamation, said people’s biggest challenges of 2022 would lead to their biggest testimonies in 2023.

”In 2023, the Lord will speak peace to some troubled homes. For quite a few people, there would be restoration of lost glories.”

In what he proclaimed his favorite prophecy for 2023, Pastor Adeboye said: “Many trouble makers will lose the ability to make trouble this year. Few balloons will be deflated this year. There will be a bit of wealth transfer. Generally, 2023 is a year of many opportunities, wonderful.”

In his new year prophecies, the founder and General Overseer of Mountain of Fire and Miracles Ministries, MFM, Dr. Daniel Olukoya, released 30 prophecies for the year 2023. The man of God who urged Nigerians to be prayerful and vigilant in 2023, added that God will deal with the wicked and corrupt leaders.

“ We need to pray against strange attacks from the waters. A year we need to pray against the spirit of lack and famine. A year of divine judgment against wicked and corrupt leaders. God will break His silence this year to deal with evil and wickedness. A lot of uncompleted destiny projects will be completed this year. This is Psalm 23 year where those who rely on God will boast in their God. A year believers should pray and break embargoes and dismantle evil monopoly. A year of disgrace for fake, hypocritical, and powerless religion. A year when God will dismantle mighty men who stand in the way of God. The Lord will fight like a Mighty Terrible One to deliver His children. A year when it is extremely dangerous for the sheep to stray from the shepherd and for you to discard good advice. A year of judgment for those who convert the altar of prayer to dens of thieves. A year of judgment for those who wickedly take innocent blood.

“A year of correction, confrontation, and change (the three Cs) for those that want to move forward. A year of joy for couples waiting on the Lord for babies. A year of regret of judgment for ritual killers, when their activities shall backfire. A year of tragedy for youths who refuse to exhibit sexual control. A year where testimonies will drive the next move of God. A year to form the habit of seeking and receiving help from heaven. A Psalm 23 year for those standing for God. A year where we must seriously pray that the mercy of God will push back the judgment stretched out against our world by heaven. We must pray against the miscarriage of God’s will in this season. A year to key into Isaiah. A year of comfort and glory for those who are 100 percent obedient to God.”

Also, the Founder and General Overseer of the Champions Royal Assembly, Prophet Joshua Iginla, spoke via the church’s YouTube channel said you should forget about the prophecies of doom that have been given about the 2023 election as there won’t be much drama during the election.

“You have to pray for Nigeria between now and the 2023 election because of the drama that may show up. But don’t worry, there won’t be much drama because God is with the country. Forget about the prophecies of doom, there won’t be much drama during the 2023 election. It won’t be as much as people are predicting because God has this country covered “, he said.

In his 2023 prophecies, the Spiritual head and founder of Inri Evangelical Spiritual Church with headquarters in Lagos, Primate Elijah Ayodele warned Nigerians not to be too optimistic about the nation’s economy in the New Year, saying that the economy would not be buoyant.

According to him, “The economy of the nation will not be buoyant. Nigeria will face further economic challenges. The Federal Government will increase Value Added Tax (VAT). Many state governors will find it difficult to pay workers their salaries. There will also be global economic issues. Some banks in the country will be in crisis. Even the governor of the Central Bank of Nigeria, Godwin Emefiele, will be enmeshed in various issues.”

Speaking about the nation’s political terrain, the cleric stated that the Labour Party will also be enmeshed in various crisis, just as he cautioned the presidential candidate of the People’s Democratic Party (PDP), Atiku Abubakar, to manage the internal crises in his party. “The Labour Party will have its crises. Also, Atiku Abubakar should manage the crises within the PDP well. But I must also say that the G5 integrity group will not make any impact in 2023 except they remain where they are. Yet, they will betray one another. Many big trees will fall in 2023.

“Also, presidential candidate of the All Progressives Congress (APC), Bola Tinubu, should know that the people who have surrounded him will betray him. That betrayal will shock him.  Restructuring will not see the light of day. Some political candidates will die before the election.

“On the nation’s security challenges, Ayodele stated that “another coup will occur in one of the African countries. In Nigeria, security agents in the warfront will protest. There will be massive protest in 2024.”

In the new year prophecies of Bishop Oyedepo of Winners Chapel, he said that year 2023 shall be a year of wildfire spiritual awakening where some Nigerians shall be walking in the fear of God as a new way of life, thereby attracting multitude to Christ and the church.

He said: “The year 2023 shall be a year of the outbreak of light that will lead to a supernatural change of story for individuals. There shall be a new dimension of explosive church growth in the year 2023.

“God shall be turning men and women, boys and girls into signs and wonders; individuals that shall be operating on the frequency of the supernatural in their various fields of endeavours.”

In his 2023 prophecies, Apostle Dare Owolabi, General Overseer of Christ Liberty Evangelical Ministry urged Nigerians to pray for the peaceful conduct of the coming general elections and urged the Yorubas especially in Lagos, Ore, Ilorin, Abeokuta and Abuja to pray for security.

The man of God also advised traditional rulers to pray to avert evil in their domains. According to him, true men of God would be favoured while the fake ones would be visited with God’s wrath. He said that farmers would  rejoice this year and added that the price of garri and beans would increase. Apostle Owolabi, also warned that people should be careful to avert being electrocuted. He also advised soldiers to pray against attacking themselves.