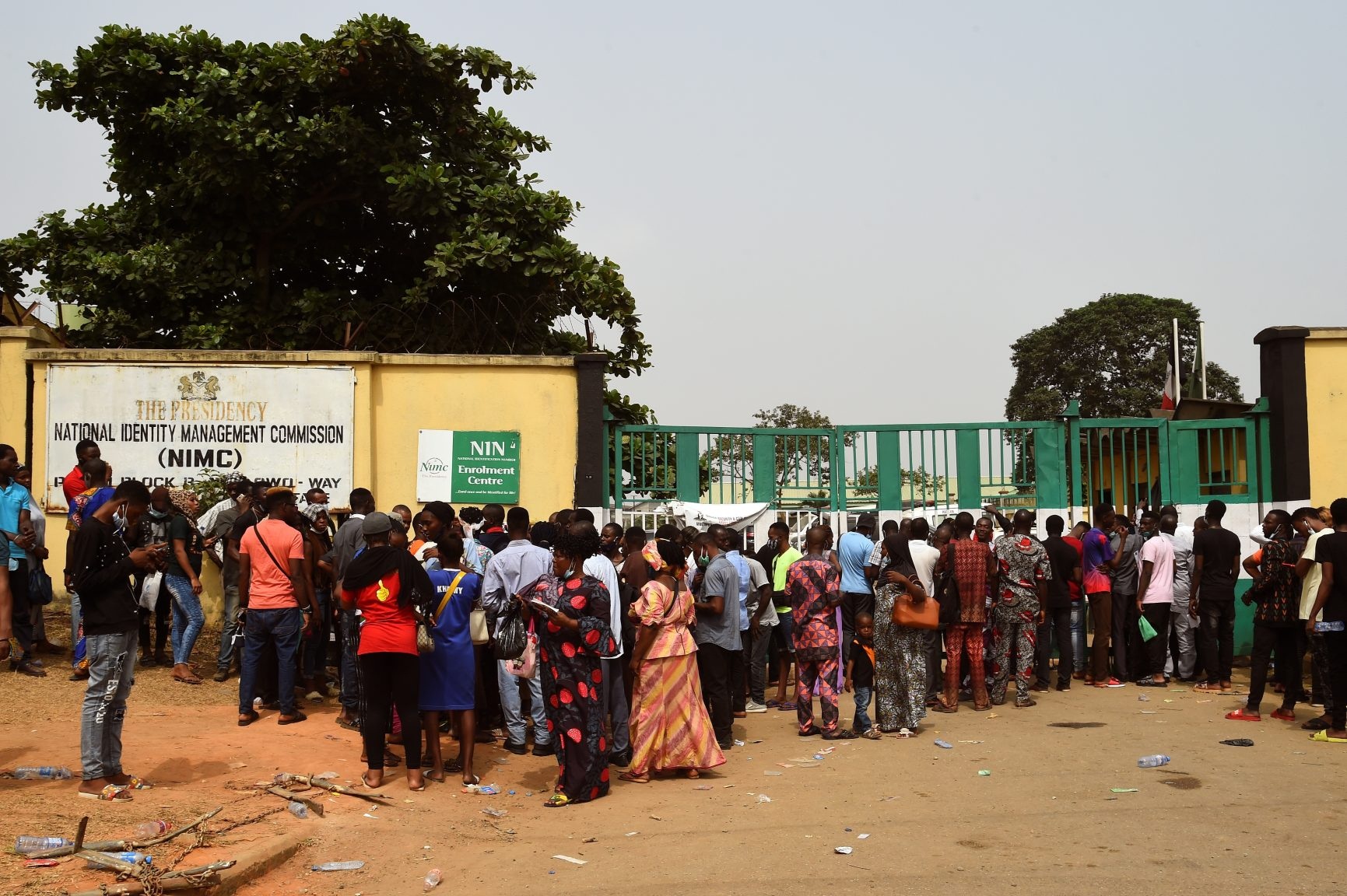 As crowds continued to besiege the offices of the National Identity Card Management for registration, Nigerians have warned that the process could unleash widespread infections of COVID -19.
Workers of NIMC on Monday resumed the registration exercise in the commission’s offices across the country after they down tools last week over fears of being infected by COVID-19 while carrying out the registration exercise.
This has led to residents in Ondo State calling for the suspension of the enrolment due to fears of a possible widespread of COVID-19 .
Visits to some of the centres by our correspondents showed a large crowd of people waiting to be registered.
At all the registration centers in the State, many of the applicants lamented their frustrations, saying that they have been visiting the centres for almost two weeks without success.
They told our reporters that they always tell them to come back.
In Ondo town, reports said hundreds of applicants were seen at the National Identity Management Commission (NIMC) offices located in the heart of the city for registration.
The people were said to be lamenting of frustrations even when they arrived at the centte very early but were not attended to by the commission and some left because of the crowd.
Speaking with The Hope, Mr Ojo Olorunyomi who came to the center as early as 6:30am said many residents were told to come back after collecting number tags, saying those who collected the numbers will be attended to till the closing hour.
Olorunyomi complained of the slow process and frustration encountered during the enrollment. Security officials also battled to control the surging crowd as people were frustrated and angry of the situation.
He added that many expressed fears that they might not beat the deadline given by the federal government for the registration.
Also, Mrs Oyin Adeola said lack of adequate computer systems slowed the pace of work and this is giving the people a big concern and also the deadline given by the federal government.
Adeola urged federal government to provide adequate support by giving the official tools to work so that the registration could be done easily and fast.
Meanwhile, the applicants have called on the federal government to create more registration centres in all the local government areas of the country instead of concentrating the exercise at the local government headquarters.
In the alternative, they urged government to relax the time lag of the exercise by making it a continuous process to last for three years.
They insisted that the exercise has brought more agonies to them alongside the economic crisis occasioned by coronavirus pandemic and the economic meltdown in the country.
Others who spoke with The Hope condemned the maltreatment of the people by the National Identity Management Commission (NIMC) and demanded that the Federal Government suspend the NIN registration.
Mr. Samuel Fadayomi, a resident in Akure urged the commission to go back to the drawing board, calling for a re-order of the enrollment process to avoid large crowds at its centres nationwide.
“I want to charge the Federal Government, the Minister for Communication, the Nigerian Communications Commission and NIMC, to come out and apologise to subscribers because this is not the best time to do this.
“I feel bad when I see people gathered in multitude during the COVID-19 pandemic; it is like a super spreader event which we do not like. But I am also aware that the relevant ministry which is the communications and digital economy is looking at this”.
According to Tayo Adekunle, “My understanding is that the whole process should be suspended so as to reorder the whole process in terms of management of the crowd because it was never intended that it would become a rowdy process like that.
He also charged the state and Presidential Task Force on COVID-19 to ensure citizens were protected at all times.
Speaking on condition of anonymity, a staff of the NIMC in Akure said that workers of the commission suspended their two-day warning strike last week to give room for negotiations with the government.
“Registration for NIN has recommenced in our offices nationwide, but that does not mean that issues of concern have been settled.
Effort to speak with NIMC official proved abortive as the reporter was told that they are not allow to speak without permission from the headquarters.