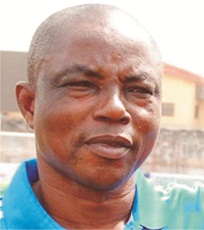 From Fisayo Akinduro, Osogbo
|
With a view to strengthening the squad ahead of the second round games of the ongoing Nigeria National League, (NNL), Osun United would make use of the one-week transfer window to add few players into the team to improve their performance.

The Omoluabi Giants are currently occupying the bottom spot of Group B1 of the NNL with a solitary point in four games, making it mandatory for the team to up their games so as to stay put in the league at the end of the season.

Speaking on this development, coach of the team, Samson Unuanel said ‘it is disheartening that Osun’ United are struggling at the moment especially, by losing points at home to Shooting Stars and Abia Comets. This is dangerous in this type of a super-abridged league where only eight matches would be played.

“We want to shop for few players during this transfer window to strengthen the squad because some players are out injured while few are battling with match fitness.”

Unuanel also confirmed that as at the moment, no player has been signed or loaned from any team while the number and list of the signed or loaned players would be made available to the public by the management by or before this weekend.

Asked on his plans to make sure the team do not relegate, the former Sunshine Stars gaffer said Osun United remain a team destined for the NPFL which makes the current performance a bit hard to believe. However, areas of lapses in the team of the leagues have been noticed and have been worked on, while players have also restated their commitment to turn the fortune of the team around positively.

Unuanel for the umpteenth time appealed to fans to rally round the team and render their unalloyed support which according to him, is sacrosanct to take the team out of its current precarious challenges.

The Omoluabi Giants will begin the second round  on Sunday, 19th May, 2019 with a trip to Ibadan, Oyo State where they will slug it out with Shooting Stars in the match day 6 fixtures.

The Oluyole Warriors won the first leg played at the Osogbo Township Stadium by a lone goal.