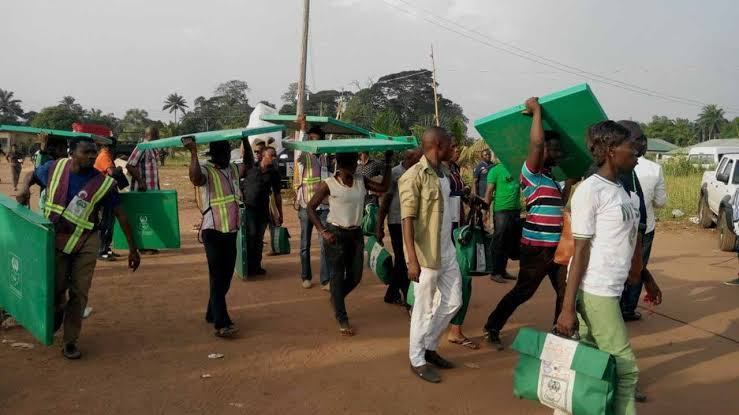 From Victor Akinkuolie , Ado-Ekiti
|
The Independent National Electoral Commission(INEC) Ekiti State chapter, on Sunday disclosed that none of its staff in the state would be recommended for prosecution for contravening the electoral laws in the just concluded 2019 general elections.

It said both the regular and adhoc staff of the commission lived above board and complied with the provisions of the laws, saying this accounted for the peaceful conducts of the polls in Ekiti.

The Acting Resident Electoral Commissioner in Ekiti , Dr. Muslim Omoleke, who spoke in Ado Ekiti, on Sunday, commended member of staff for not pandering to the dictate of the politicians, but work in tandem with the electoral guidelines.

Omoleke, who doubles as the INEC Administrative Secretary, added that some electorates who have issues during the election in some selected areas were being handled by the security agencies.

“None of our staff will face the electoral tribunal for trial, because they decided to work for Nigerians and not politicians, all of them worked for the success of the exercise.

” Ekiti State was on the top in terms of peaceful conduct of the elections, with particular reference  the credible way those elections were conducted .

“ Our staff, both regular and adhoc were circumspect of their actions and the position of the constitution regarding what becomes of you and your career if you rig during elections, and  this guiding principle helped them a lot .

“None of them was reported to have collected bribe or take actions that suggested that he was working for any political party, they all worked for Nigerians.

” Election rigging is a criminal offence and a disservice to any nation and whoever perpetrates such act must face the full weight of the law”.

Omoleke, also commended Ekiti electorates and the security agencies for making the job easier for INEC , saying their resolves to follow the laws contributed to the successes recorded in the polls.

The commission only conducted the presidential , National and state assembly elections in Ekiti during the 2019 general polls.

The governorship election was held in the state on July 14, 2018.

However, the election that was supposed to end on March 9 during the States’ assembly elections across the country was concluded in Ekiti last Saturday, after the conduct of  supplementary poll in Ekiti East state constituency 1.