No to feudal hegemony 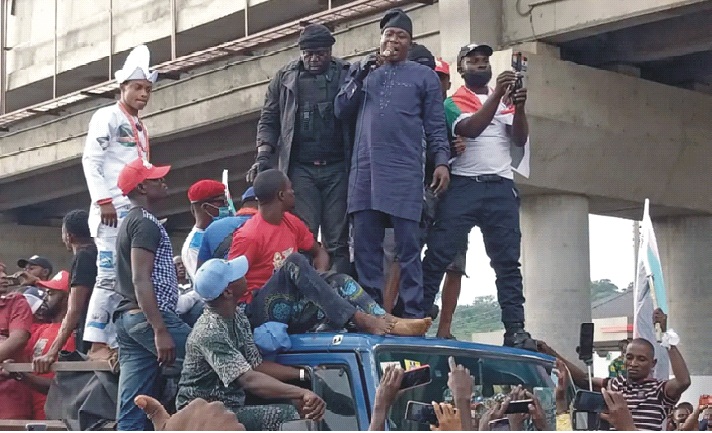 Pro-Yoruba nation agitators, led by Mr. Sunday Adeyemo (alias Sunday Igboho) at the weekend stormed Ado Ekiti, the capital of Ekiti State for a rally.
Speaking at the event, which was witnessed by prominent politicians and residents of the State, Igboho said that Yoruba race was already weary of the Fulani alleged feudal and political dominance in the country.
Shortly before his arrival, a rally had been staged by different groups, including Ilana Omo Yoruba, being championed by Prof Banji Akintoye, which took off around 11:00am with a large crowd at Fajuyi Park via Okesa , Ijigbo and Old Garage areas of Ado Ekiti, where they paid obeisance to the Ewi, Oba Rufus Adeyemo Adejugbe.
Addressing the highly ecstatic mammoth Yoruba nation enthusiasts, Igboho promised that Yoruba will never be slaves again to any other race, saying the only way to actualise this is by having an independent country and regaining freedom from oppression.
Describing the present Nigeria structure as a contraption, Igboho added that time was already ripe for the race to wake up from its sleep and long slumber and fight for its own emancipation.
He said: “I am sorry for coming late and I want to really apologise for this. I went to a meeting with some Yoruba leaders. That was why I came late.
“Today, we are here to sensitise our people that we can no longer endure the sufferings being meted out to us by any feudal lords. We are no longer slaves under any tribe.
“The South has oil and water and other natural resources, but Fulanis are the ones enjoying them. Most of our university graduates are Okada riders, being what our politicians who tell lies recklessly have made them to be.
“Yoruba is the most educated race in Nigeria, but are these graduates getting jobs? No. Rather, our politicians would be buying motorbikes for them for Okada riding. This is wrong and would have to stop it. Can they allow their children to be riding Okada?
“Today, they have shared everything that belongs to Nigeria among themselves. The President is a Fulani man, the Inspector General of Police, Director General of the Department of State Services, the Chief of Army Staff, Chairmen of the National Drug Law Enforcement Agency and Economic and Financial Crimes Commission and Comptrollers General of Immigration and Customs are all Fulanis.
“They said they gave us the Vice President who is mere spare Tyre.
“Let me say this emphatically, we won’t vote in the Southwest in 2023. We need a government of our own.
“The next line of action now is that, we are entering the bush to chase away these Fulani herders. We don’t want them on our lands again. We will pursue them just like I have been saying”, he stated.
In another statement signed by Media Communications Secretary, Ilana Omo Oodua, Maxwell Adeleye, Igboho added: “Just like we have said severally, there’s nothing to restructure anymore in Nigeria. The Coup d’tat of 1966 and how a few bourgeoisies rewrote the federal system of Nigeria to suit their interest is enough reason not to think about restructuring or a revert to 1963 constitution. If reverted, the powerful people holding Nigeria by the jugular will need just Executive invasion to turn everything into their abyss of interest, just like they did to the Republican constitution of 1963.
“Also, the ongoing review of the 1999 constitution is an academic exercise and a complete waste of time. It is just a usual way of providing food for the boys. It is a disaster that must never be allowed to happen. We at Ilana Omo Oodua, supported by well-meaning Yoruba people within and beyond the shores of Nigeria, will continue to mobilise and educate our people on the dangers associated with our continuous stay in Nigeria.
“Yoruba Land is the hidden wealth of Africa. We own the land from Atlantic Ocean up till Jebba..we own Lokoja. We have oil, land for agriculture, sea port…. we have the largest deposit of bitumen in Africa. We have the largest deposit of limestone in Africa. We used to be the second producer of cocoa in Africa, before the current system focused only on oil.
“We are ready and our people are ready. The rally today is to sensitise the good people of Ekiti state to start preaching the gospel in all the nooks and crannies of Ekiti state. We shall succeed and triumph against the gighota. We shall rescue our land from the jaw of under-development.
“Our continuous stay in Nigeria is slowing down our progress. We were progressing and excelling well in all ramifications before the coup of 1966 which has dragged us 60 years backward. The only panacea is for the Yoruba people to have their independence from Nigeria and that shall be achieved peacefully and logically without violence”.
In what could be interpreted to mean uncommon and rare display of love and loyalty to a course, Igboho’s supporters had to endure for over five hours before he finally sauntered in a long convoy into the State through Ado-Iyin road at dusk.
The participants, who danced to anti-Nigerian songs being supplied to add panache to the rally, rejected Nigeria in totality and flaunted various derisive placards and handbills, espousing reasons why Yoruba Nation should severe existence with the present Nigeria.
Despite the tulmutuous crowd, the rally was peaceful and orderly being heavily guarded by the operatives of the Federal Road Safety Corps, Amotekun Corps, Nigerian Security and Civil Defence Corps and the police .
As they matched and sang the Yoruba Nation’s proposed Anthem, the Igbo and Itsekiri traders plying their trades along the procession routes trooped out enthusiastically in solidarity and hailed the participants.
The crowd had created serious traffic logjam, thereby making motorists to have hectic day in navigating out of the holdup.
The Coordinator of the Coalition in Ekiti, Chief Jacob Orisamika, said it was high time Yoruba severed tie with Nigeria, rather than being enslaved by other nationalities as being witnessed.