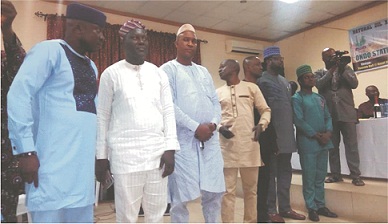 The Natural Oil And Gas Suppliers Association Of Nigeria (NOGASA), Ondo State Council, has inaugurated its new executive members that will pilot its affairs in the next five years with Mr Michael Kolawole and Mr Aretolu Oladipupo as chairman and secretary respectively.

The inauguration ceremony with many dignitaries including Governor Oluwarotimi Akeredolu of Ondo State in attendance represented by his Special Adviser on Union Matters ,Comrade Alaba Isijola and Olore of Ore, Oba Johnson Adeola, Caretaker Chairman, Irele LG Nicholas Akinnola and  others was held in Akure.

The  national president, NOGASA, Mr. Benneth Korie, (DOI), represented by the Secretary-General of the association, commended the   state governor  and other stakeholders  for the success of the occasion.

South-West Chairman of NOGASA,  Mr. Fatuyi Yemi Philips,  thanked the present administration in the state for making it the most peaceful state in the oil-rich Niger Delta region and as one of the  most viable investment as one of the  destination in Nigeria.

He said, NOGASA’s role is to serve as the bridge between the Government and the Oil and Gas companies to ensure stable supply of natural gas to industrial, commercial and domestic consumers, which will turn drive Industrialization, provide employment for skilled and unskilled local population in addition to directly improving Internally generated revenues plus standard of living.

The Benin Zonal chairman of NOGASA,  Mr Zumanu Gbenga charged the new executives to be very discipline, hard working, respect their clients and respect the product which they sell to their buyers and suppliers.

The newly elected chairman, Mr. Kolade Micheal Asan, appreciated his members for having confidence in him and other executives, just  as he promised that he will justify the confidence reposted in him.