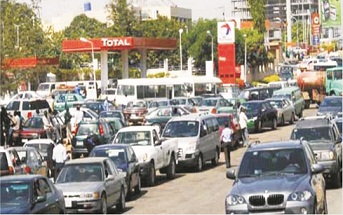 By Adekola Afolabi
|
Queues have disappeared at filling stations within Akure, the Ondo state capital, two days after long queues resurfaced within the metropolis.

This is coming as two persons were arrested at Odode-Idanre in Idanre council area in the state by the Petroleum Monitoring Task Force for selling petrol above the approved pump price of N145 per litre.

A visit to some filling stations within the state capital yesterday showed that many marketers who hitherto closed their stations and refused to sell to customers two days ago are now selling the product without any queue.

Some petrol users who commented on the artificial scarcity blamed the federal government for allegedly planning to increase the official pump price above the present N145 per litre.

Three of them, Peter Adekunle, Alaba Adebisi and Taiwo Oladiran, warned federal government against increase in the official pump price of the product so as not to create more problem for the people.

They, however, expressed satisfaction over the disappearance of queues at filling stations, saying that they can now buy the product with ease.

Chairman of the State Task Force, Dr Doyin Odebowale during a monitoring exercise to some filling stations in Akure South and Idanre Local Government Areas of the state warned marketers to stick to the approved pump price or face the full wrath of the law.

Over 200,000 litres of fuel were in the underground tanks of the over 10 filling stations visited by the task force in the two council areas.

The task force took time to check the underground tanks of the stations to ensure that they were not hoarding the product.

Seven different stations in Akure were visited by the task force who also spent time to supervise the sales of the products.

At Idanre, two marketers were apprehended for selling at N150 as well as manipulating their pumps to cheat their unsuspecting customers.

They were, however, later released and warned to revert to the approved pump price or risk prosecution.

Some petrol users including motorists, commercial motorcyclists and others appreciated the state government for the intervention and charged the Department for Petroleum Resources, DPR, to take a cue from the proactive step.

The task force promised to take the enforcement to other senatorial districts of the state to restore normalcy in all filling stations across the state.