Not too young to plunder 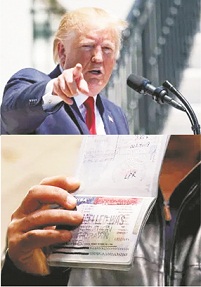 Not too young to plunder

Theo Adebowale
|
Many Nigerians have expressed displeasure at President Donald Trump concerning his discriminatory immigration policy towards Africans.  At a point, several Africans resident in the US who had traveled out of the United States, were denied entry on return.  Not a few of them were deported to their countries of origin.  Truth be told, Donald Trump has been unfair to immigrants, to Africans, to Nigerians.  Imagine his determination to erect a wall of inhibition against freedom of movement across borders.  He sure hates Africans and not Mexicans.  In one report, President Donald Trump was quoted as saying that Africans watch their leaders plunder their resources, empty they treasuries while they fold their arms helplessly.  What does he mean?  Does he expect Africans to protest against oppressive looting political tyrants?

Does Trump not know that in Africa, God or Allah preordains leaders and it is immoral to question their authority however obnoxious it may be applied? Trump is dead wrong.  If they don’t question oppressive leaders, is it not to the advantage of politicians like Trump to have a large population of Africans, settlers and citizens who would eventually be unquestioning as he imposes his policy prefetences on the citizens?

It would be politically irresponsible for Africans and Nigerians in particular to watch helplessly as the American President continues to marginalize them in the God’s own country.  If we turn a blind eye, at visa restrictions, violation of right to privacy as represented in the case of monitoring messages in the social media or outright investigation of bank transactions, then a bigger problem is on the way.  That was the pattern of thought in some quarters until this past week when a syndicate was burst.  Lo and behold some 80 Nigerians had been assiduously engaged in cyber fraud, international consolidated dispossession of several categories of individuals and corporate bodies of their legitimate income to the tune of millions of the US dollars.  Big boys!  They have lived large, earning international awards including recognition by Forbes.  A 26-year-old Nigerian that did not inherit fortune surfaced on the international media with investments in oil and gas, agriculture, manufacture, transportation.  Just name it.  America opened its doors and they took advantage of its generosity and gathered to do business.  They build a network across the continents and established a cartel.

Remember in Nigeria, corruption incorporated is the most thriving industry.  No one is too young to defraud.  Neither is any one too old to scam.  The story was told of a smart young man, Ambali, friendly and enterprising.  He visited a widower so often helping him to clean his apartment, do his duties and washing his car.  Then Ambali came again.  This time in the night.  Earlier in the day, the host had gone for week end shopping.  Mindful of his lean purse, had prepared to feed himself for a week or more.  The emergency guests descended on his kitchen and store for hours they ministered to their appetite.  At their departure, another guest of the widower could not find his newspaper.  He had been dispossessed.  When the chief host visited his kitchen he discovered a pile of used dishes and an empty store.  Their guests had come to eat, to sleep and to plunder.  As the news of the 80 fraudsters in America was still trending, a major critic of Donald Trump that had just lost an expensive item saw that he had just lost his voice.  He need not be told they are too young to plunder.

Years ago, a man came to the mission house and introduced himself as Elder Inyang.  He claimed to work with the S.C.O.A which lodged him at the Premier Hotel, Ibadan. But he was not comfortable in the midst of the sinful guests and customers.  He wanted the church to organise a temporary accommodation for him till his employers fixed his residence.  The local pastor was surprised at his humility and choice of modest holy living.  He would want his children to take after these sterling qualities.  The elder took church officials to his place of work in Gbagi where they were well received.  They later followed him to Bodija to know his residence that was being furnished.  There was scarcity of Peugeot products.  A good number of which priest and laity made arrangements with the elder to help then get cars, and paid him cash up front.  One Sunday morning while the faithfuls were in the church singing praises, listening to messages and making supplications to their Maker, the elder eased himself out, with a huge sum of money from well-to-do church members, he disappeared into the thin air!  Within a few days, it dawned on them all that they had been duped.  43 years after, no trace of Elder Inyang.  All those expecting their cars from him have gone to be with the LORD.

The thriving business has been in operation for a long time.  Its operators are enterprising, skilled and dynamic.  They fortify themselves in voodoo, intricacies of business, details of transaction and now information technology communication.  They are well rooted in Nigerian banks.  They send text messages announcing your ATM card has been deactivated.  As such you should call a GSM number to get reconnected.  One of them may call to make the announcement and ask for your Bank Verification Number promising to affect reconnection.  In other instances their operatives are at Automatic Teller Machine to affect your being defrauded.  This is Nigeria, the open market for scammers.  To our surprise, the bankers hardly apprehend any of the scammers regardless of their biometric data at their disposal.  Why would one be surprised when bank executives were discovered to have duped their customers, gotten the bank bankrupt, and secured injunctions from the court to stay prosecution?  They are not too young to plunder, nor too old to swindle.  This is Nigeria where every group has its own area of operation, separation of territory.  Chief Executives implement projects not disclosing the values of such projects.  When they are magnanimous, they may announce how much has been saved without telling us cost prices.  Not long ago, it was disclosed that it costs more to construct a kilometer of roads in Nigeria than elsewhere in West Africa and Africa in general.  Again, State Government contests any regulations that would not make them oversee disbursement of local government funds.

EFCC and ICPC are two of the various organisations established by law to prevent, investigate, and prosecute fraudulent practices.  Since the days of President Olusegun Obasanjo Administration, their activities have been considered selective, political opposition targeted.  Even in the days of our anti-corruption crusade, it is no secret that offenses can be written off, offenders forgiven and repentance rewarded.  When political penance becomes a possible means of transforming, criminals to reputable citizens even without plea bargain, leadership in discredited and reform doubtful.

As they go round the globe demonstrating they are not too old to swindle, Not too young to plunder, nor Not too Christian to loot, shall we begin to mount pressure on the American President and their banks to ‘recognise’ the fundamental culture of some Nigerians who have made it their norm to corrupt mechanisms for orderly society and lawful economic intercourse by employing every new devise to make the world more comfortable.

Give the message to Mary that yahoo boys have taken over the space.  They are not too young to build, they are just ready to give us an identity to make the rest of the world take us as a people Not so worthy of respect.