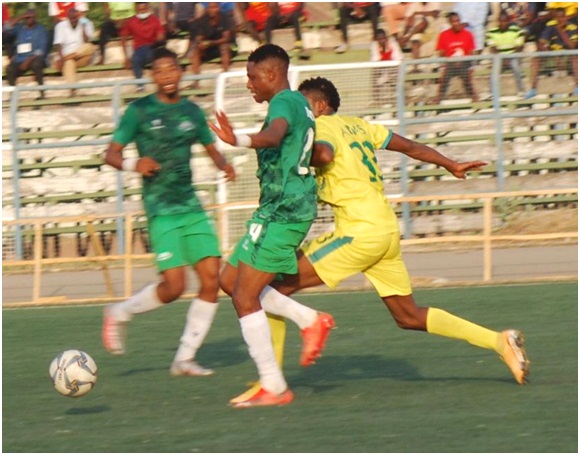 Nasarawa United’s quest to extend their unbeaten streak to four suffered a setback on Wednesday as they lost 1-0 to fellow northern side, Kano Pillars.
In a clash that saw both sides sizing each other up for supremacy, Anas Yusuf drew the first blood with a left-footed shot from range but was dealt with by Ayeleso Suraj in goal for Kano Pillars in the 12th minute.
United kept pressuring the host team up until the 20th minute, with Silas Nwankwo the danger man upfront.
Kano Pillars turned the tide almost immediately. Super Eagles’ Captain, Ahmed Musa, masterminded some counter-attacking moves that saw goalkeeper, Mohammed Galadima called into several forced saves to the applause of the fans at the Stadium.
The pressure from the home side paid off minutes later as Malam Auwalu Ali struck from inside the box to put the Sai Masu Gida 1-0 ahead.
Substitute, Michael Tochukwu, also nearly got his name on the scoresheet only for his thunderous shot to go inches above the woodwork.
The duo of Ahmed Musa and Rabiu Ali combined well to wreak some havoc but for the brilliance of goalkeeper, Mohammed Galadima.
1-0 the entertaining encounter ended as United lost their first points in the second stanza of the campaign.
The Solid Miners remain 5th on the league table with 39 points, five points behind table-topping Kano Pillars, and will now return to Lafia where they will square up against visiting Adamawa United in the matchday 24 tie on Sunday, 30th May, 2021.