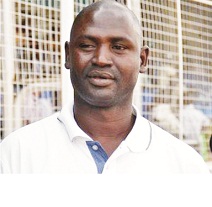 He stated this in a post match interview after the Akure Landlords suffered a disappointing 2-1 defeat in the hands of a plucky Katsina United side in a midweek match day 25 NPFL encounter at the Ondo State Sports Complex.

According to him, “there is no need to panic as no team has won, earn or lost anything yet.

“We have won games away this season and we are still capable of repeating same. We will rectify the problem.”

The defeat, first at home this season set the Akure landlords back in their push for continental places in the 2019/20 season.

A one-way traffic it was from the get go with the home side exacting themselves on the game, and could have had their nose in front when Fuad Ekelojuoti had a goal-bound header tipped over in front of goal in the 8′.

United profited from cheer luck when a foul on Waheed Adebayo inside the area was adjudged a free kick by the arbiter, before Suleiman Ibrahim gave the Chanji Boys the opener with a header from a devilish cross down the left after 37 minutes of play.

Just before the break, Tope Akande went close to restoring parity for the hosts, but his glancing header was parried away by the goalkeeper, Kassaly Daouda.

Then in the 52′ Ogunniyi Omo Jesu rattled the woodwork from a free kick while Mohammed Suleiman could not find the target when left alone with teammate, Ekelojuoti in front of goal on the hour mark.

With the hosts heightening the pressure and risking it all in search of a leveller, Joseph Atule grabbed a second for the away side in a cold blood fashion following a team move againt the run of play in the 67′.

Silas Nwakwo responded for the homers by guiding home from the rebound of Omaka’s effort 17 minutes, however Niyi Adekunle and the rest of his United’s backline defended desperately to deny his former side a leveller in the end.

Following the reversal, Sunshine Stars slipped to 9th place with 34 points and will next navigate back-to-back away games at Akwa United and Nasarawa United when the league resumes from the enforced COVID-19 suspension.