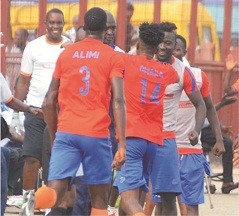 By Femi Atolagbe
|
As Sunshine Stars FC of Akure recorded their first victory of the new NPFL season over the league defending champion (Enyimba International), the Owena Whales Technical Adviser, Kabir Dogo has commended his players for ensuring the three maximum points were in the kitty.

Dogo said, he was happy his team picked the maximum three points from the game against a resilience opponent.

He added that “I am very glad, if you look at the calibre of the team  we played, and we secured victory. We have to appreciate God and the players,” he said.

“We  created many scoring chances even though we are unable to covert all, but I can assure you that it is a matter of time we  would begin scoring more goals.”

Thanks to a 1-0 win over Enyimba of Aba in a  midweek matchday four encounter decided at the Ondo state sports complex, Akure the state capital that catapulted the Akure landlords to 10th position on the log from not too fancy position they earlier seated.

Midfielder, Anthony Omaka netted the only goal of the game in the 10th minute of the encounter, pouncing on the ball inside the area.

Both sides came into the game with impressive results from their last outings. Sunshine Stars secured a 1-1 draw against Abia Warriors in Umuahia while Enyimba thrashed Akwa United 3-1 at home.

The home team got off the blocks confidently against their rivals, and it didn’t take long before they grabbed the advantage.

Anthony Omaka found space on the edge of the area before powering home a low drive which hit the bottom right corner of the woodwork into the back of the net.

Few minutes later, Israel Abia tried his luck from another angle but was kept out by Stanley Nwabili just as Fu’ad Ekelojuoti’s effort from the near post was also saved by the shot stopper.

Sunshine Stars had other chances to double the advantage before the end of the first half, but Ihuarulam, Omaka and Ekelojuoti missed other chances from different attempts.

Sunshine began the second half where they left the first and five minutes into it, the champions failed to clear their line to serve Israel Abia a real chance to through a goal, but the big-framed striker failed to convert from six-yard, sending the crowd into loud murmuring.

Chances were few and far from that moment but Enyimba massive probing with more upfront almost paid off in the closing stages of the game from a dangerous set play.

Daniel Darkwah sent a corner kick straight at goal, but Jamiu Alimi who played the better part of the second half limping with all substitution exhausted, was well positioned on the goal line to head out from danger.

With their hearts in the mouth, the home crowd cheered as Omaka’s first goal of the season stood as the difference between the two rivals and handed Enyimba their first defeat of the season.

During his post match interview,  the Head Coach of Enyimba FC, Usman Abd’Allah, said the first formation he planned to use in the match did not work out.

“This forced us into making quick substitutions in the second half,” he said.

Abd’Allah was however quick to point out that the match was a good game generally, in view of having to play against a strong home team.

Sunshine Stars now have five points from three matches while their next match would be against Katsina United at the Mohammed Dikko stadium on Sunday.