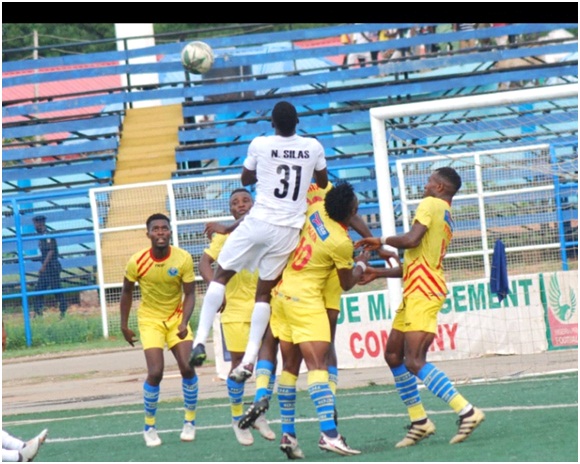 Nasarawa United returned to third position on the log of the Nigeria Professional Football League with a 3-1 humiliation of visiting Warri Wolves during the NPFL matchday 26 clash.
The encounter decided at the Lafia City Stadium, was the only game of the midweek televised on the NPFLTv. and Nigeria Television Authority, NTA, to the global audience.
A brace from Silas Nwankwo in the 54th and 58th minute respectively in the second-half and an own goal from David Chimezie in the 64th minute of same half saw United cruising home with a 3-0 lead.
Some poor defending, however, saw the visitors’ Williams Sunday scoring an acrobatic consolation goal, twenty-two minutes before stoppage time to reduce the deficit to 3-1.
Efforts by the Seasiders to further reduce the deficit proved unsuccessful as United held on to the scoreline till the end to massively recover from their narrow 1-2 away loss to Katsina United last weekend at the Muhammadu Dikko Stadium, as Silas Nwankwo was voted Man-of-the-match after netting his tenth goal of the campaign.
The result saw the Solid Miners return to 3rd position, three points behind table-topping Kano Pillars who lost their away game 0-2 to Rivers United in Port-Harcourt.
Plateau United will be the next guest of the Solid Miners on Sunday at the Lafia City Stadium as both North-Central teams renew their rivalry.
According to the Nasarawa Coach, Bala Nikyu “It was a good match, at this critical time, every point is very important.
“I knew it’s going to be a tough match because we beat them in their home during the first round, and so would be prepared for a revenge mission.
“Indeed, they gave us a strong challenge, but we are happy we had a field day.
“We can now prepare for our next opponents, that’s Plateau United.”