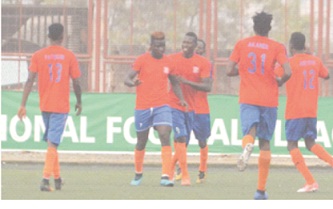 Sunshine Stars Assistant Coach, Kayode Julius has attributed the convincing display of his players to the team’s resolve to winning streak and quality in depth.

He said; “We have resolved to start winning again with this game after the Lobi’s game and we are happy to have achieved that.

“Today, Sunshine Stars have one of the best teams in the country with three quality players in each position. That is why Suleiman, Jimoh and others are able to step up and deliver in the absence of Israel Abia (league top scorer).”

Meanwhile, Mohammed Suleiman opened his Sunshine Stars goal account and set up another for Wasiu Jimoh to hand the club a 2-0 victory.

The win has brought an end to a four match winless run for the coach Kabiru Dogo and helped the side moved two places to 7th in the NPFL log with 19 points.

Sunshine Stars had the visitors under the control from the start, with Suleiman finding the back of the net inside the opening two minutes. However, the goal was chalked off for a foul.

Despite seeing little of the ball, Jigawa Golden Stars almost drew the first blood through Abdullah M’ Lala who blast high from six yards after the hosts failed to clear their line in the 27 minutes’.

Suleiman again went close with another stunning bicycle kick that required a top of the drawer save from Kenneth Christopher to be kept out agonisingly at the half-hour mark as the hosts continued to dominate overwhelmingly.

Nevertheless there was no denying the marauding man at the stroke of half-time: he raced in timely to smash home from Fuad Ekelojuoti’s lose ball for Sunshine Stars’ 1-0 advantage heading into the break.

Five minutes into the restart, sleeky forward, Uche Ihuarulam went close with a one-time effort that missed that target by few inches from the edge of the area.

The score line could have stood at 1-1 during a rare Jigawa Golden Stars advances on the break in the 63′, but Samuel Agba fluffed his line to a goal mouth miss with Ojo already drawn out of position.

Wasiu Jimoh  came off the bench to tuck home brilliantly against the run of play from Suleiman’s assist and sealed the win for the Akure landlords 10 minutes from time.

The Akure landlords next visit Gombe for a match day 14 meeting with Wikki Tourists of Bauch on Sunday.