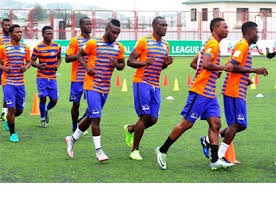 By Femi Atolagbe
|
Sunshine Stars Football Club was held to a 1-1 draw at home by Warri Wolves FC in the match day two of the Nigeria Professional Football League (NPFL).

Charles Upele gave the visitors the lead in the 29th minute when he beat Sunshine defence to  head home from corner kick.

Israel Abia cancelled Upele goal in the 35th minute after slotting home into the bottom corner calmly to ensure Sunshine Stars were brought back to the game.

Sunshine’s penalty appeal was waved by the center referee in the 82nd minute after the Seasiders glovesman fouled Alaba Adeniyi inside the area.

Sunshine Stars ended their league opener with a draw at home .

The club’s coach ,Kaburu Dogo while answering questions from  journalists submitted that the scores of the game didn’t reflect the performance of his team.

He revealed that Sunshine Stars did sign new players for the season, saying the players were not eligible to fixture in the game due to logistics.

“These are the players  on ground as soon as the new players are cleared we will start playing them .

The challenges before Sunshine are beyond what we can see on the surface , I  implored every body to join hands with us to make the team great.”

The Sunshine gaffer who declined comment on his team’s penalty appeal, said he left the Referees decision to League Organisers to judge.

Everybody saw it to be a penalty ,but the Referee knows better why he didn’t give us the penalty.

He therefore joined others to advocate for Video Assistant Referee VAR in the Nigeria Professional Football League NPFL.

Warri Wolves Coach Evans Ogenyi, commended his boys for their resilient and discipline on of the pitch, saying after playing a draw at home in the league opener we make up our mind that we are coming here to get a good result.

He urged the league organisers to improve on the security at the match venue and continue orientation for clubs supporters .