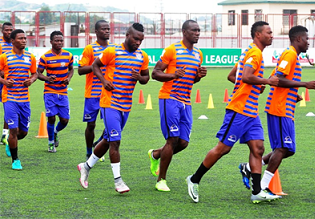 By Femi Atolagbe
|
As Sunshine Stars Football Club tackle Warri Wolves at home in  match day two of the Nigeria Professional Football League (NPFL) on Sunday, the club’s president, Otunba Tajudeen Akinyemi has expressed confidence that his team will outwit their visitor to the admiration of their fans.

Recalled that Sunshine Stars were missed in action during the league opener, due to their opponent (Rangers International) continental engagement, while the Seasiders played 1-1 draw at home against Akwa United in the match day one league opener.

Akinyemi during a phone interview with the Sporting Hope said the club’s preseason tour in Ibadan has reposed the team’s confidence ahead of the new season.

According to him, our preseason preparation has been putting us in good shape day by day, we played numbers of friendly matches during the tour in Ibadan.

“We even travelled down to Ilorin to defeat ABS of Ilorin and played 1-1 draw with Kwara United before we rounded  it off with a 1-0 win over Shooting Stars on Wednesday.

“Our players displayed a promising football artistry during matches , which I believed will motivate the team to a better performance this season.”

The club President revealed that Sunshine stars have rejigged the team with signing of high profile players, which he said will be unveiled on Saturday before Wolves encounter.

“Our hope and aspiration is that Sunshine Stars should perform very well this season unlike the two previous campaigns where we were celebrating relegation survival.”