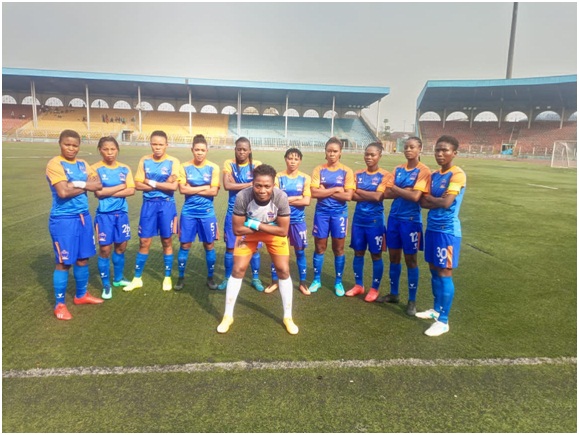 Sunshine Queens’ second half spirited efforts could not undo the first half sloppiness to Royal Queens FC of Warri in a match day four encounter of NWFL played at the Warri Township Stadium.

Lose of concentration from the Akure landladies got them punished twice, four minutes before the break.

Royal Queens put two goals past Sunshine Queens in the 41 and 44′ minutes of midweek’s encounter.

Ovuma Ovie could have put Sunshine Queens ahead in the sixth minute of the encounter, but a last ditch clearance from the host defense denied the visitors the chance.

Sunshine Queens quest for a goal before the break were thwarted by the host.

The restart of the game saw Tayo Onilude’s tutored side coming out hungrier to turn the table around, but the host sit back to curtail the visitors’ pressure.

The Akure landladies rued many goal scoring chances in the second half of the encounter.

Sunshine Queens changes were unable to yield the desire result as Royal Queens belt firm for a home win.

Sunshine Queens Head Coach, Tayo Onilude in a chat with sports Journalists shrugged off the outcome of the game, saying her team will go back home to work on areas of deficiencies in the team.

“Hope is not lost, this is a football, where you win some and lose some, we will come back stronger.

“We will go back to the drawing board to learn and correct our mistakes. There will be a great improvement in our subsequent matches,” She said.

Royal Queens Coach, Whyte Ogbonda said the game was not an easy one for his side, but thanked God for the three points.

“I must confess, with the three points I’m a happy person today.”