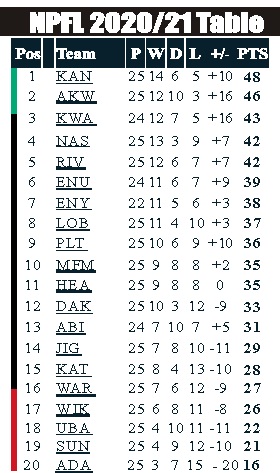 As Sunshine Stars Football Club, play host to Dakkada FC in today’s Nigeria Professional Football League (NPFL), the fans of the Akure Landlords have resolved to prayers for the team to break 18 winless streak.
The Sporting Hope in a separate interviews with fans who craved for anonymity in Akure, “the state capital, they said the team belong to us and we don’t want the team to be relegated.
“We are not ready to trade blame game, all we want is for the team to come out of the danger zone, we won’t mind fasting and pray for the team to overcome this difficult time.
“We are appealing to the State Government to give the new coach and his crew maximum support financially and technically.
The players should also be paid their salaries as an when due, no player can play well with an empty stomach, we are trusting God that the team will not be relegated. Players need motivation, the management should introduce payment for goal scored also for clean sheets, so that the whole team would ensure they play well as a team.
“Injection of new younger players in the team is a welcome idea, we are also appealing to other fans to stop putting the players under undue pressure.
“We still have about 13 matches to play, our current position on the log is not our place, as from today’s match, new thing will begin to happen to the team.”