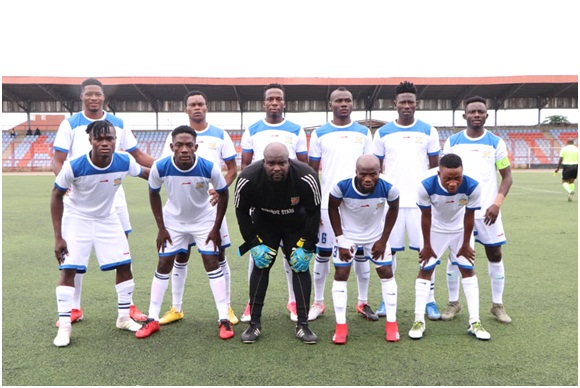 Sunshine Stars in their quest to stamp their status in the Nigeria Professional Football League (NPFL) for the coming season will play host to Katsina United in Akure, the state capital in a must win week 34 encounter.
The Akure Landlords after 33 matches remain in 16th position on the log with 37 points while their week 34 opponent, Katsina United were on 13th position with 42points .
A win for the Akure Landlords in today’s encounter will raise the hope of retaining their status in the Elite league for the coming season.
Sunshine Stars would be banking on their recent form which earned them a win in Owerri penultimate week ago and home defeat to Kano Pillars coupled with the week 33 draw against Adamawa United at Pantami Stadium to get the available three maximum points from their visitors.
Sporting Hope in a chat with Sunshine Stars coach, Deji Ayeni said playing so many matches within few days is telling on his players, saying despite that they would go all out to do the state proud against their visitors.
Ayeni said the overbloated fixtures have negative medical effect on the health of the players, saying the coaching crew have also prepared the players phsycologically ahead of their next game.
“That was the reason we shuttle the journey to ensure the players have 12 hours rest in Jos , before proceeding home, we got to Akure around 11pm on Monday night, we gave them all days to rest yesterday in order for them to regain all they have lost during the long journey. We all know that the normal time for players to recover from a single match is about 24 to 48 hours.”They only warmed up yesterday evening to shake away tiredness and lactic acid in their body ahead of today’s game against Katsina United.”
He adds: “It’s our system, we have to manage ourselves, after the stress of over 19 to 20 hours on the bad road network in the country we are back to base, we will approach the game with all seriousness and confidence, I’m sure victory will be ours at the end.”
He said the whole fixtures are jam packed because of the CAF dead line on submission of teams for confederation cup.
Ayeni therefore appealed to the management of the round leather game in the country to find a lasting solution to the tight fixtures by ensuring they start the league at the appropriate time which would be in line with the world football governing standard to avoid endangering the lives of the players and their coaches.
Sporting Hope reports that with five matches remaining for the 2020/2021 season that title hopeful, Akwa United hold on to the first position with 61 points, while Nasarawa and Kano Pillars trailing them from second and third positions tallied on 58 points respectively and Enyimba occupied fourth position with 57points.
Meanwhile, Jigawa Golden Stars, Warri Wolves, FC Ifeanyi Uba and Adamawa United occupied 17, 18,19 and 20 positions with 36,34,34 and 24 points respectively.