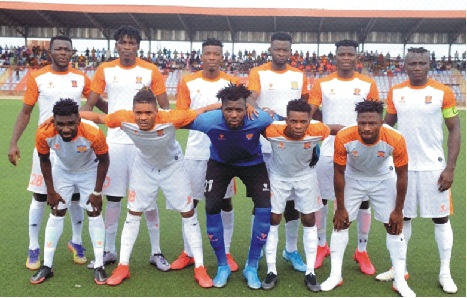 Goals from Leonard Ugochukwu and Cooper Ikenna was all Sunshine Stars needed to defeat Niger Tornadoes in the matchday 33 of the Nigeria Professional Football League NPFL contest decided at the Ondo State Sports Complex, Akure.

Ugochukwu fired a missile up the right corner of the net to give the Akure based side the lead in the 15th minute of the encounter.

Niger Tornadoes drew level through Jimmy Abdul with his thunderous strike three minutes into the break.

The hostility continued in the second stanza as both sides displaying their football artistry to the admiration of the spectators.

Nwogbada header from Leonard Ugochukwu cross was saved by Tornadoes goalkeeper in the 53rd minute . Moment later , Sunshine Stars’ penalty appeal was waved away by the center referee after Azeez Ajagbe was fouled in the area.

The visitor’s goalkeeper again , agonisingly saved from Ajagbe’s indirect free kick lay up inside the area in the 62nd minute . Before substituted Copper Ikenna restored Sunshine Stars lead in the 70th minute

Sunshine Stars Goalkeeper, Japhet Opubo made a great save from Tornadoes strike in the 84th minute, the homers kept all the three points in their kitty as the contest ended 2-1.

Sunshine Stars head coach, Emmanuel Deutsch said the game was a good one for his side saying patience brings success while it’s otherwise in the absent of patience.

He congratulated the football loving people of the state, saying he would wait till end of the season before congratulating himself.

“I want to know where I stand on the log at the end of the season.”

His Niger Tornadoes counterpart ,Coach Abubakar commended his players for putting in their best in the game, saying the result was short of their plan coming into the contest .

He added that they will go back to the drawing board to address the area they were not doing well before their next match .

The result took Sunshine to the seventh position on the log with 48 points .