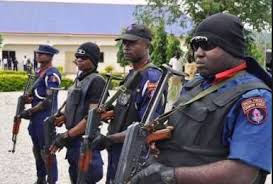 Victor Akinkuolie, Ado-Ekiti
|
Men of the  Nigeria Security and Civil Defence Corps, NSCDC, Ekiti state command, have arrested a 57-year-old suspected fraudster, Yomi Akinwunmi, who was said to have swindled three persons to the tune of N1.8 million, in Ado-Ekiti, Ekiti State capital.

The State Command,  while  parading the  suspected fraudster on Monday, said he  specializes in obtaining  money from people under false pretence around  Ekiti State capital.

The Hope Metro gathered that the victims, Taiwo Oluwoye,  32, Adeola Joseph,  71,  and Yusuf Bamidele, 36, alleged that after Akinwunmi had defrauded them of N1.8 million under false pretence, he also hypnotized them so that they would not remember any transaction made with him.

Akinwunmi, was reportedly arrested in his shrine along Oke-Ila axis of Ado-Ekiti,  following series of complaints lodged at the NSCDC headquarters on his activities.

During the raid on the shrine, the suspect was found  with charms , a woman’s pant,  a calabash and a picture of a  popular prophet in the state capital.

When  interrogated on how he got a lady”s pant  found with him, he said the pant belonged to his wife.

The suspect,  who confessed to the crime, is currently  assisting the command to apprehend other members of the gang whose network springs round South Western part of Nigeria.

In his remarks, the  State Commandant of NSCDC, Mr. Solomon Iyamu, however,  warned the people of the state to be satisfied with what they have and warned traditional chiefs in the town to desist from shielding fraudsters in their districts, saying anyone caught would be seriously dealt with.

The  Commandant further explained that the suspect would be charged to court after  preliminary investigation on the matter has  been concluded.