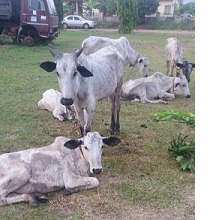 From Victor Akinkuolie, Ado-Ekiti
|
The Ekiti State Commandant of the Nigeria Security and Civil Defence Corps (NSCDC), Mr. Solomon Iyamu, has confirmed the arrest of two herders and detained about 100 cows.

The NSCDC boss said the arrest of the suspects were made possible through a joint operation of the Agro Rangers Unit of the command, Nigeria Army, Police, Ekiti State Anti-Grazing Agency and men of Vigilante Group of Nigeria (VGN)

The operation which he said lasted for about six hours took place at Ago Aduloju and Ogbese axis of Ise-Orun and Gbonyin local government areas of the state.

Iyami disclosed  that the  two herders of Fulani origin who were arrested will be charged to court as soon as investigation is completed on the matter, while about 100 hundred cows  detained during the operation are currently at the premises of the corps in Ado-Ekiti.

The Ekiti NSCDC commandant explained that there has been series of complaints by farmers especiallyabout herders migrating from neighboring states to Ekiti in search of fresh pastures for their animals .

According to him, “the herders who were discovered uprooting tubers to feed their animals and also destroying  barns and other valuables,  were arrested when they were destroying some farms along Ado/Ijan road.

Iyamu appealed to farmers in the State not to take laws into their hands and always report any perceived herder’s threat to the men of Agro Rangers Unit of the Corps for prompt assistance.

He however commended the joint operations and thanked them for the synergy  urging  them to work more for the unity of Nigeria.

He commended the Commandant General of the NSCDC for his laudable achievement geared towards solving farmers, herders clash in the country which he said has given birth to Agro-Rangers Unit and safeguard investments of  farmers as well as that of herders in Nigeria.